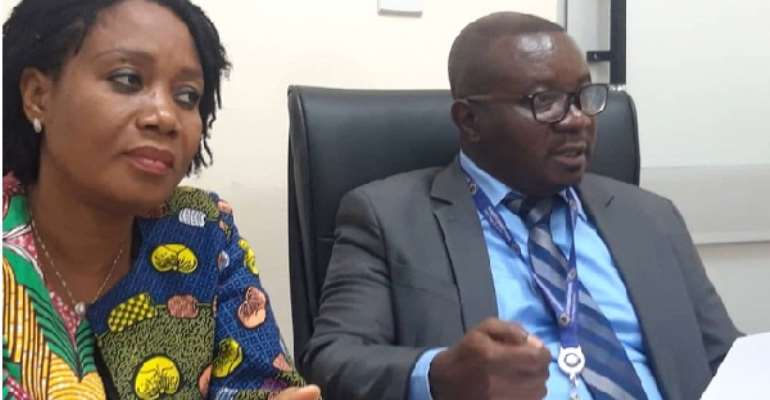 Michael Twum Barimah Badu and another official of ECG

The Electricity Company of Ghana (ECG) says the activities of power thieves are having a heavy blow to its operations and robbing it of huge sums of money.

General Manager of the Revenue Protection Unit at ECG, Michael Twum Barimah Badu, who disclosed this to journalists in Accra recently, averred: “ECG is suffering a lot from power theft. When we purchase from our power suppliers, we lose about 24.6%. Out of the 24.6%, 10% is due to technical losses and a whopping 14.6% goes for commercial loses and 1% of these losses translate to approximately $17million (GH₵96.6 million).”

According to him, ECG will this year, embark on unannounced nightly swoops to clamp down on such illegal activities countrywide.

Noting, “The first tax force has to do with the unplanned outages within the company. The second is the commercial loss reduction tax force,” he said the exercise would target industries, entertainment centres, hotels and households which used electricity power illegally and caused financial loss to the state.

This year, Mr Badu said ECG was targeting a 20% reduction in power lost annually, which stood at 25%.

Per the regional distribution, the theft was prevalent in the Ashanti Region, followed by Accra West and the Central Region.

The study further revealed that consumers and staff of the power utilities and their accredited agents were the major actors in electricity theft, adding it was not only restricted to the residential sector.

Firms and individuals who operate energy-intensive businesses using steel, paper, and chemicals were also found to be indulged in power theft.

Churches, hospitals, police barracks, schools, and even some state agencies, were also among the list of consumers found to be engaged in such activity.

The arrests are expected to reduce revenue losses through power theft from the current 24.6 per cent to 20 per cent, a move that would save the country $85 million (GH₵482.8 million).

Over the last five years, ECG saved GH₵167.5 million from 177.26GWh of electricity it recovered through the monitoring of power theft.

1,079,632 KWh of power was recovered from the Accra East, Accra West, Tema, Eastern, Ashanti, Western and Central regions of the ECG, he noted, adding that out of the estimated GH₵1.5 million surcharges from the operation within the Christmas season, only GH₵152,214 had been paid.