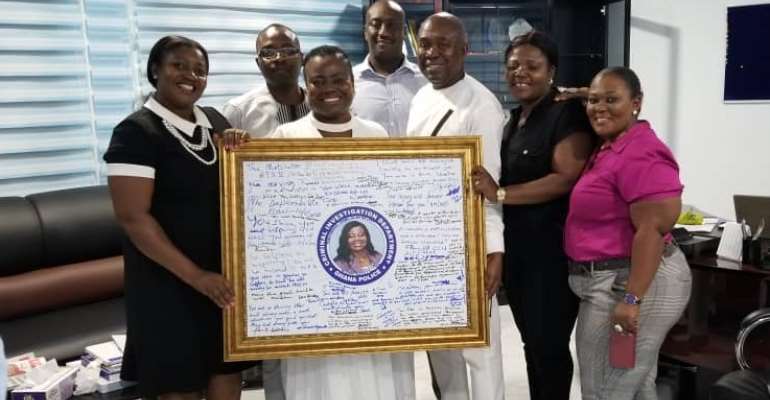 A befitting send-off ceremony has been held for the outgoing Director of the Criminal Investigations Department (CID) of the Ghana Police Service COP Maame Yaa Tiwaa Addo-Danquah.

The ceremony saw top police officials, government functionaries and heads of the various units under the CID in attendance.

They took turns to share how good and visionary an officer she has turned out to be during her term that also saw the CID receive massive transformation.

They said during the 26 months of her leadership, the detective training academy which has been neglected over the years received a facelift.

“A digital forensic laboratory has been constructed to ensure effective investigation of cases of cybercrime and is awaiting commissioning,” the heads said in a joint statement.

According to them, about two-thirds of detectives spread across the country received training and re-training in their various fields to enhance their investigative skills under the leadership of their outgoing boss.

“Through her efforts, plans for the Detective Training Academy to be affiliated to the University of Cape Coast to run a bachelor of the science curriculum in police science is ongoing and we are grateful,” they said.

Besides, they said her tenure saw the installment of two modern elevators in the CID building.

ACP Faustina Andoh–Kwofie, Director General of the Commercial Crime Unit, described the outgoing CID boss as “an all-round woman who was dedicated to her duties.”

She said personnel appreciated her work and would continue to support her even as she takes a greater task, saying “we shall continue to pray for you but never abandon us as you leave the CID.”

COP Tiwaa who is now Director General in charge of Welfare, in a remark, urged personnel of the CID to support the new boss, COP Ken Yeboah, to succeed.

“What I will want you to do for me is to continue with the digitization process that we started,” she requested.

She maintained that the case tracking system, when completed, would help senior police officers and unit heads to get firsthand information on cases.

Also present were representatives of some media houses.