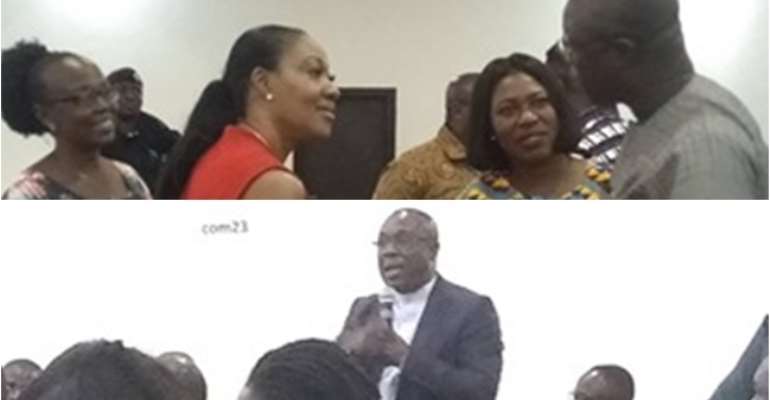 As the Electoral Commission (EC) continues to make reforms in preparation for the December 2020 Elections, it has awarded its data centre contract to Persol Systems Limited.

The contract will see the construction of the new Production and Disaster Recovery Datacentre.

The selection was made following a successful international competitive tender process and the subsequent shortlisting of bidders last year, in compliance with the Public Procurement Act regulations.

The telecommunication giant, MTN, has also secured the contract to provide network or internet connectivity services to the various district offices of the Commission.

Mr Samuel Tettey, the Deputy Chairperson in charge of Operations at the EC, announced this at a briefing of Civil Society Organizations (CSOs) in Accra, to justify EC's decision to compile new voters' register and Biometric Voter Management Solution (BVMS) ahead of the December 7 Elections.

The meeting provided the opportunity for the Commission to take feedback and input from the CSOs in order to enhance the electoral process.

Mr Tettey, in a presentation, said the compilation of a new voter register and acquisition of Biometric Verification Devices (BVDs) would enhance the credibility, integrity, and transparency of the December 7 Parliamentary and Presidential elections.

Additionally, the EC paid US$4 million to the Vendor, Superlock Technologies Limited (STL) annually for maintenance of the biometric solution, thus, describing it as a drain on the public purse.

He said the EC spent two million Ghana cedis to repair the BVDs before they were deployed for the District Level Elections in December 17, last year.

In view of that, Mr Tettey explained, the EC decided to procure new BVDs and biometric kits that are modern, reliable, robust and affordable for the December 7 Elections, to safeguard the integrity and credibility of the elections.

Mr Tettey said due to the proprietary format of the old biometric system data, the EC could not migrate all that data into a new system; hence it was prudent to acquire a new biometric solution that could capture the fingerprints and facial images of registrants clearly.

Making a comparison between upgrading the old biometric system and securing a new one, Mr Tettey said the Commission would have to spend US$15 million to upgrade a new biometric system, while only six million dollars was required to buy a new one.

On the assertion that the ECOWAS Protocol prohibited the compilation of a new register in an election year, he said, the Protocol rather stated that there should not be any changes to the electoral laws six months to the election.

On the cost of compiling a new register, Mr. Tettey argued that the EC spent GH¢490 million to conduct the Limited Registration in 2016 with only 800,000 voters captured, but the Commission would only spend about GH¢390 million this time around to register between 13 and 16 million eligible voters.

Mrs. Jean Mensa, the Chairperson of the EC, in her welcome remarks, said the Commission conducted a market survey to ascertain the prices of items needed for the registration in order to ensure value for money, as well as the judicious use of public resources.

She said the meeting would enable the Commission to consider their feedback and input into the electoral process to build a robust and credible electoral system.

Some participants lauded the EC for providing a platform for them to express their views and concerns and urged all stakeholders to support the Commission to compile a new voter register.

Others, however, called for more public sensitization to explain the rationale for a new voter register.