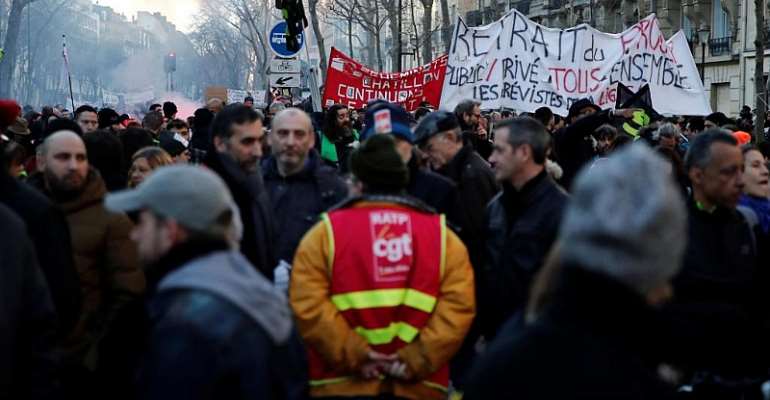 Protests against pension reforms rumbled on for a sixth round Thursday, but figures were down compared to previous weeks. The rallies came on the 43rd day of strike action that has disrupted transport and cost France 1 billion euros, with rail operator SNCF bearing the brunt.

Opponents of President Emmanuel Macron's proposed pension overhaul kept up pressure on the government Thursday with a sixth interprofessional strike in Paris and other French cities.

Police made eleven arrests in the capital but the march across southern Paris was calm, unlike previous ones that have attracted a few dozen 'Black Bloc' hooligans.

Despite the lower turnout, left-wing unions refuse to take a last stand.

"It's never too late to make the government back down," Philippe Martinez of the CGT union said ahead of a demonstration at the Montparnasse train station that included striking teachers, lawyers and hospital workers.

Despite the government's decision last week to temporarily remove from the billl a controversial measure to raise the retirement age for a full pension from 62 to 64--left wing unions want the reform to be scrapped altogether.

High cost
"Drop this project once and for all, abandon it and come back to the negotiating table," Yves Veyrier of the FO trade union urged on Thursday.

But Prime Minister Edouard Philippe wants left unions to come to their senses, saying that the six-week stoppage has "gone on for too long," and had cost the country more than €1billion.

Rail operator SNCF has borne the brunt of the financial hit - with the strike over the government's pension reforms costing it about €850million, the Prime Minister's Office at Matignon estimated.

The financial consequences have also had a ripple effect on public transport operator RATP, which has lost around €200million.

Light at end of tunnel
The travel disruption has caused misery for commuters but the situation has improved from when the industrial action began on 5 December.

Transport authority RATP said travel would be "disrupted" on Friday 17 January but there would be a significant improvement compared to Thursday.

All Metro lines in Paris will operate albeit mostly with limited services and restricted hours.

Only the automated lines 1 and 14, plus line 11 will operate as normal.