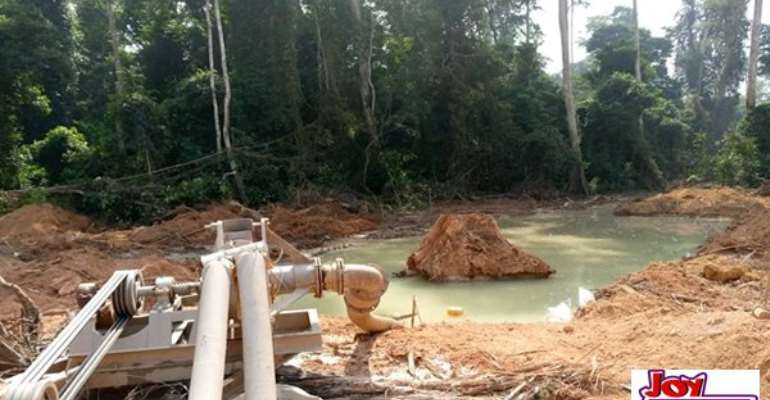 The forest has come under siege following the invasion of illegal miners.

It appears that the relentless fight waged against illegal mining popularly known as Galamsey has hit a snag.

Reports indicate that this illegal act is back in full swing with the government task force doing little as compared to the early stages of the crusade stop the act.

In the Oda River Forest Reserve in the Amansie Central District of the Ashanti region, seven hectors of the 16,000 hectors of Forest Reserve have been wiped out by Chinese illegal miners and their Ghanaian counterparts.

Initial swoops by personnel from the Forestry Commission led to the arrest of two Chinese nationals who were detained at the Jacobu Police Station for 48 hours.

The two have since been granted bail as investigations continue.

Thursday's unannounced visit to the forest by the Lands and Natural Resources Minister, Kweku Asumah Kyeremeh followed a tip-off by a whistleblower about how the Forest has come under siege following the invasion of illegal miners.

The Minister who was visibly distraught at the level of devastation, could not hide his anger.

He immediately announced a shift in approach when asked by Joy News’ Latif Iddrisu if the Ministry and the administration for that matter will consider changing the method as far as tackling the menace is concerned.

"You know these miners if you come here unarmed, you may be attacked....unless our brothers in the military are here. Their uniform alone is enough scare to them".

In response to how soon the military officers will be deployed, the Minister said, "the action has to be immediate"

The dodgy nature of the illegal miners according to the Minister makes it almost impossible for authorities to monitor their activities.

The Minister went further to announce, "two platoons will be deployed...if we deploy two platoons, sixty soldiers around, nobody will come here".

Meanwhile, few meters away from the illegal mine site which had been deserted at the time the Minister and his team got there, the sound of chanfyn machine could be heard operating on the Oda River, lacing it with toxic chemicals.

But it appears powerful politicians are behind the illegal activities. In an interview at the heavily pillaged mine site, District Forest Manager for the Bekwai District, Ransford Twum Damoah said, "we came here with all forces and they also had military protection"

The manager who appeared and sounded helpless but said he is not, whispered in the interview "I will tell you certain forces are behind...big men are behind all this."

When asked if he can identify the "big men" Mr. Damoah paused, adding, "we don't know them but we know some of their boys"

In all, two excavators were retrieved from the mine site, with many other mining equipments and personal effects of the absconded illegal miners being set ablaze.

President Akufo Addo in August last year assented to new illegal mining law which pegs sentences for the illegal act to some 25 years. But it appears that is not deterrent enough.