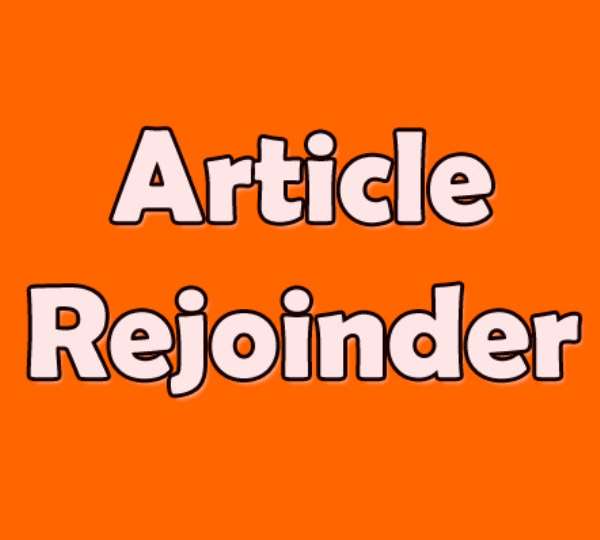 My attention has been to a publication in Daily Graphic on page 29 and Graphiconline.com claiming that the Central Regional Police Command has referred the docket on a case of alleged forgery and fraud involving the Managing Director of Tacoa Construction Limited, Mr Henry Tackie, to the Attorney General’s Department for advice.

The story which was written by one Shirley Asiedu-Addo, claimed that I, Mr Tackie was arrested after investigations pointed out that I and my company allegedly presented fake bonds to secure four separate contracts from the University of Cape Coast (UCC).

As a law abiding citizen, I went to the Central Regional Police Command with my lawyer and my statement was taken. I was requested to make available some documents to the Central Regional Police Command since the same case is pending before a high court and was asked to go home without being charged for anything. I subsequently provided all the documents as requested by the Regional crime officer, Chief Superintendent Reuben Asiwoko.

It is therefore, curious that the Regional Crime Officer, Mr Asiwoko, who handled the case as a professional police officer could lie through his teeth to a journalist that I was charged with forgery of documents and fraud when he knows very well that I was never charged.

Winning The Contracts
My company won the contracts in 2014, 2015 and 2016 with indisputable documents through a competitive bidding process. This can be verified at the Public Procurement Agency and the Central Tender Review Committee.

Before signing the contracts, my company was requested to present a performance bond and advance payment guarantee. We relied on an agent for his services which were backed by payment receipts. Mostly the bonds are issued to confirm with the duration of the contract. But in our case, the bonds had expired because the contracts has exceeded its tenor(2years)

In early April 2019, the university under the new Vice Chancellor Prof. Joseph Gartey Ampiah wrote a letter to my company notifying us of alleged fake bond and gave us a period of seven (7) days to respond to which my lawyers responded within two(2) days with copies of receipts of payments from the agent. But we later realised that the agent was not honest and immediately logged a complaint at the Police for his arrest and prosecution. The police went to court and secured a bench warrant for his arrest and are currently looking for him.

However, out of the four contracts, two have been fully completed and advance payment duly paid by us. The two others are ongoing and are at various stages of completion. The construction of three-storey regional study centre at Zuarungu in the Upper East Region is seventy percent (70%) complete and the construction of a three-storey regional study centre for CoDE at Jumapo in the Eastern Region is thirty percent (40%) complete.

Termination of contracts
Whiles all efforts had been made by us to stay at site and complete these projects, The Vice Chancellor wrote to us terminating all these projects, purportedly on the basis that securities submitted for the signing of the contract were all fake.

We then petitioned the Education Minister, Hon Matthew Opoku Prempeh to investigate the circumstances to leading to the illegal termination of the contracts. Because these securities had expired and required the prompting of the University for our renewal as the practice is if the projects have delayed, for two of the projects the securities are of no effects as all mobilization had been recovered and the projects completed for takeover, for the other two performances and recovery of mobilization are underway as the projects are ongoing.

Furthermore, though, the said securities were obtained from a third party, the police had investigated the expired security and obtained a warrant for the arrest of the agent involved which the university is aware and could therefore not terminate on base on frivolous reason.

The minister, Dr Matthew Opoku Prempeh directed the National Council of Tertiary Education (NCTE) to investigate the alleged illegal termination of the contracts awarded to the two construction firms by the UCC. A committee was set up to investigate the issue but the university disrespectfully turned down several invitations by the committee. Till date the university is yet to honour the invitation of the committee.

Prior to that, we had already petitioned the President of the Ghana Institution of Surveyors who is an agreed arbiter for the amicable solution to the numerous hindering the smooth running of the projects. However, the University brazenly ignored the arbitration process.

But the University Authority refused to comply with the processes and rather through its lawyer, Solomon Faakye, dragged me and my company to the Cape Coast High court to get a court order to release the keys of the completed projects they claimed we used fake documents to secure for the students to get access to the buildings.

The Cape Coast High Court at the last sitting referred the case to the Chief Justice in Accra for advice, as they were waiting; the University authorities went to break the padlocks of the buildings to use it without my approval.

My lawyers Gaisie Zwennes Hughes & Co then dragged Professor Joseph Ghartey Ampiah, Philip Owusu Ntim, UCC's Director of Physical Development and Solomon Faakye, the university’s lawyer for contempt of court for disregarding the High court’s directive and lawlessly breaking into the Business school building which has been constructed by his firms and a subject pending before the court.

It was after we cited the three for contempt that out of fear, they connived with some rogue police in the region led by the regional Crime officer to tarnish my image and that of my company which has been in existence for over 45-years.

I want to state that the publication is a complete falsehood and an attempt by the university and its collaborators to tarnish the enviable reputation of a successful 45-year construction firm.

Because I secured the four separate contracts from the UCC with genuine documents and has delivered, as most of the projects have been completed but the University Authority has failed to pay me.

I also want to state that Central Regional Police Command has not concluded any investigations and no docket have been referred to the Attorney General’s Office for advice.

The Regional Crime Officer is misleading the public with false information to please his paymasters and will soon laugh at the wrong side of his mouth.