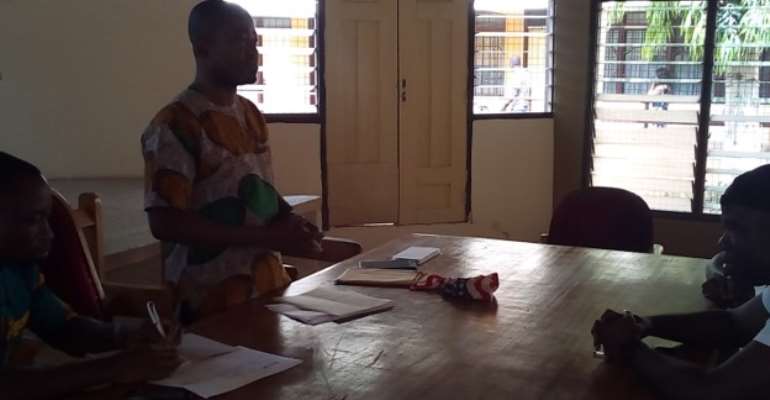 Module Implementing Partners of the Nation Builders Corps have called on government to ensure prompt payment of stipends of beneficiaries of the programme to ensure total commitment to duty by the beneficiaries.

The call was made during a meeting with the Berekum East Municipal Secretariat of the Nation Builders Corps in Berekum of the Bono Region. The meeting which brought together all the Implementing Partners namely the Department of Agriculture, Ghana Education Service, Information Services Department, the Ghana Revenue Authority, the Business Advisory Center and the Ghana Health Service was aimed at accessing the impact of trainees of the Nation Builders Corps after a year of implementation of the programme.,

In his opening remarks, the Berekum East Municipal Coordinator of the Nation Builder Corps, Mr Richard Henneh said the programme was introduced by the government to address graduate unemployment and also to give beneficiaries experience to prepare them for permanent employment. He said a meeting has since been held between the presidency and all coordinators of the programme to discuss the challenges of the programme. He, however, stressed that it was important to hear from the user agencies and hence the meeting.

All the module implementing partners lauded the initiative and said it has complemented their staff strength thereby ensuring improvement in service delivery. The Acting Head of the Department of Agriculture, Mr Sally Alhassan said the beneficiaries under the Feed Ghana module has very instrumental in tracking the subsidized fertilizers under the Planting for Food and Jobs programme. He added that through the orientation the department took beneficiaries through, they are able to give technical support to farmers. He concluded that some of them have since been employed by the Local Government Service.

The Municipal Information Officer for Berekum East, Mr Baffour-Mensah A. observed that there was the need for Module Implementing Partners to treat beneficiaries of the programme as part of their staff and give him the necessary training to be acquainted with the duties of the various department. He said it was only the motive of government to give beneficiaries employable skills could be achieved. He said the programme beneficiaries have been very helpful in carrying out the department’s activities especially public education and research.

In his concluding remarks, the Berekum East Municipal Coordinator of the Nation Builders Corps Mr Richard Henneh urged partners especially the Ghana Education Service to be strict in their supervision of the beneficiaries and they do to their staff.