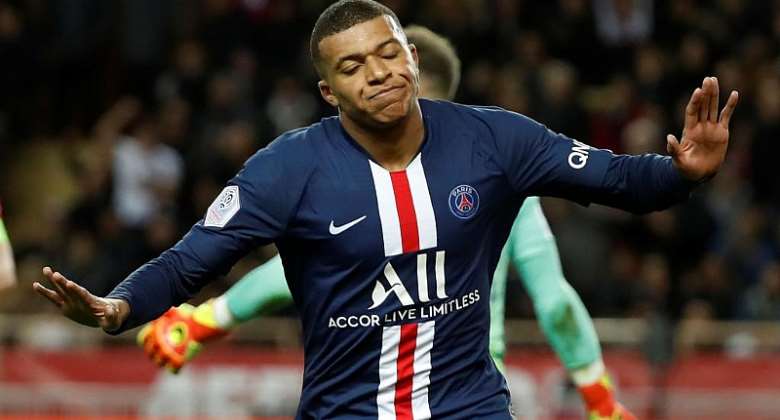 Kylian Mbappé bagged a brace as Paris Saint-Germain destroyed Monaco 4-1 to move eight points clear at the top of Ligue 1.

The 21-year-old France international scored PSG's first and final goal in the rout of an opponent who had held them to a 3-3 draw four days earlier at the Parc des Princes.

In a see-saw battle on Sunday, Monaco came from behind to lead 2-1 before a PSG resurgence took them 3-2 ahead. Monaco's leveller came late in the second-half.

On Wednesday night at the Stade Louis II, there were no such thrills.

"In every area, we were better than Sunday," said PSG coach Thomas Tuchel. "It was a deserved victory, we had lots of possession."

Neymar made it 2-0 from the penalty spot in first-half injury-time after Kamil Glik had fouled Layvin Kurzawa.

Pablo Sarabia's goal was set up by fellow substitute Marco Verratti before Mbappé completed the rout of the club where he exploded into prominence three seasons ago.

"With our four attackers, we can carry out our plan," added Tuchel. "The objective was to win the game, take the three points to improve our position."

Change
For Monaco coach Robert Moreno, the defeat was chastening. "I am very happy and proud of my team," he said after his first home game in charge.

"At 3-1, we took risks but had we scored a second then the mental situation would have changed and the last few minutes would have been interesting."

Victory for Monaco would have taken them fourth and to within four points of Rennes who lie in third - the final place leading to next season's Uefa Champions League.

Rennes moved to within five points of second placed Marseille on Wednesday night after eding past Nimes.

Adrien Hunou scored the winner in the 64th minute to ensure a sixth win in the last seven games.