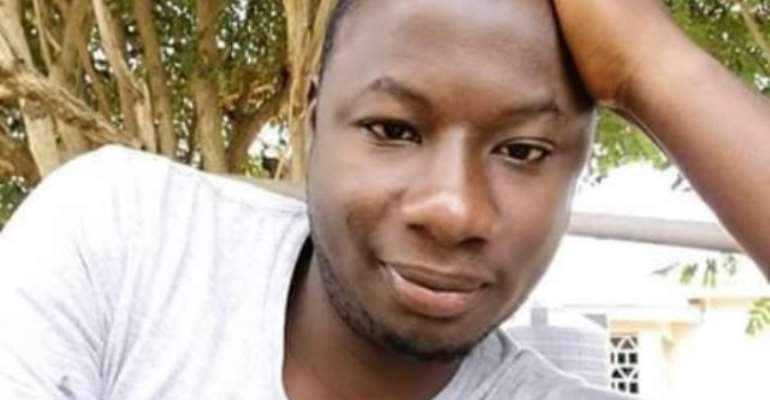 The Police Service has dismissed claims it has abandoned the search for the killers of investigative journalist, Ahmed Suale.

Ahmed was shot and killed at Madina, a suburb of Accra in 2019 by unknown assailants. He was shot thrice – twice on the chest and once on the neck – while he drove home after a family gathering.

A crucial part of the investigative firm, Tiger Eye PI, played an important role in the Number 12 documentary which led to the resignation of GFA boss, Kwesi Nyantakyi and the sacking of dozens of African referees for their involvement in alleged corrupt acts during matches.

Mourners pray at the burial of Ahmed last year

Despite his gruesome murder, however, the police have yet to prosecute any of the persons arrested in connection with the murder leaving the public infuriated.

At a ceremony to mark the first anniversary of the murder of the journalist, from where Joy News’ Komla Adom reports, Deputy Superintendent of Police (DSP) Juliana Obeng of the Public Affairs Unit of the CID dismissed claims that the Service has abandoned the search for the perpetrators of the crime.

DSP Obeng said the Criminal Investigations Department of the Service is on top of the investigations and is making progress in finding Ahmed’s killers.

“The CID or the Ghana Police Service has not rested in its efforts to get the perpetrators to face the full rigours of the law. Investigators into this case are working round the clock, 24/7 on the matter.

“Every lead given us is given the needed and required attention,” she added.

She encouraged family members, friends, media and the general public to continue to volunteer timely and accurate information which will assist the police in its investigations.

She assured that investigations are rigorously ongoing “and justice will certainly be delivered.”

President of the Ghana Journalists Association (GJA), Roland Affail Monney, is worried about the effect the continuous delay in apprehending the killers of Ahmed will have on Ghana’s integrity in terms of press freedom.

“This one incident caused us to slip from our first position on the league table of Free Media in Africa to the 10th. Globally we are 33, now we are 37 so it means that the consequences of Ahmed Suale’s murder are in catalogue.

“There is the need for the police to speed up investigations into this matter because it is causing our image to bleed as a citadel of democracy and a beacon of press freedom,” he added.

He renewed the Association’s resolve to not relent until justice is delivered for the family of Ahmed.

Mr Monney also cautioned journalists to make their personal security a priority even as the country nears the 2020 polls.

“Avoid places which will endanger your security or imperil your lives and if you are invited to a function, please do your checks, make sure that the place is safe for you to go because your life is far more important than the news you are going to fetch.

“You ought to be alive before you can fetch the news so in order priority, your life first and the news second. Never should you put your life and news on the same scale,” he advised.