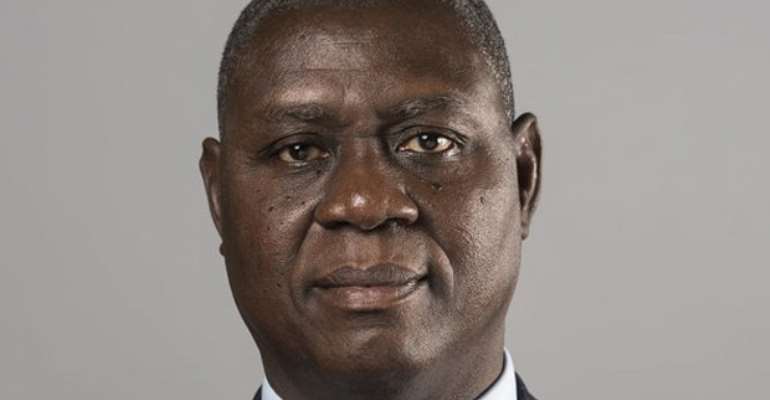 Throughout all ages, in every country in the world, the highest paid public servant, the most powerful position, the most honourable and most glamorous position in society is CHIEF JUSTCIE (CJ).

By the Grace of God today you are the CJ of the Republic of Ghana, sitting on the very chair that CJ Fred Apaloo sat on, and his many successors, including Justices Wiredu GK Acquah and others.

We know each other very well, from our days at Legon at the Law Faculty, to your practice in Koforidua and on the Superior bench in Accra. I have appeared before you a thousand times, and interacted with you at the personal level several times.

I will never forget that day in Berekum, Kato, one Saturday afternoon while leading a group of NPP politicians greeting at a funeral, I saw you seated above in a mourning cloth under some tree—I was so surprised, I shouted “My Lord” and you waved back at me. About 30 minutes later you walked to where I was seated at the funeral grounds and shook my hands and said you were leaving, back to Kumasi.

I was happy when the president nominated you for the exalted position of CJ.

You have reached the summit of your career in life. Beyond this position, there is nothing else. We are all hoping and praying that you will enjoy the Grace of God by living through as CJ until you hit the retirement age. May He NOT call you home while in this office, like He did for some of your predecessors. JK Abban, Justice Wiredu and GK Acquah.

My lord CJ, you have two choices: either to just sail through, peacefully, giving speeches, travelling outside on conferences and seminars, or to make a mark, by putting your foot down, and leaving a legacy for all time.

Practicing in the courts in Accra, I noticed that with almost every new CJ, some new project would take place. At least I remember so well the fence wall around the Judicial Complex, built in the time of CJ Wiredu and of course the new High Court Complex designed and built in the reign of CJ Georgina Wood.

Your very first priority must be how to get state of the art High Court Complexes for the new Regional capitals, especially Goaso, Sefwi Wiawso, Danbei, Damango and Nalerigu. It is better cheaper and more economical to build than to operate in rented quarters. Within two years from now you must commission all these projects.

The next priority must be a critical look at legal education in Ghana. My lord, the population of Ghana is over 30 million, and you know very well that LAW is the pillar of the society. We need to produce a minimum of 1000 lawyers every year in order to cope with the pace of development.

As Chairman of the General Legal Council, I recommend very strongly that you put in measures to ensure that the doors of the Ghana School of Law will be opened wider so that more people can pass through to become lawyers.

My lord Chief Justice, some of your Judges keep far too long at one station, and that encourages corruption. If you put Mr. X to a place, like Berekum, as Circuit Court Judge and you allow him to sit there for four five six years, he gets so familiar with literally everybody there so that dispensing justice becomes skewed. Why should a High Court judge sit in the same chair for four five six years? Why not transfer him to Dambai or Sekondi?

Petitions against wrongdoing are rife and you are the final authority to deal with them. Please, my lord, ensure that petitions against judges are thoroughly investigated, under a Certificate of Urgency, and decisions taken on them. I felt very sad when I met a judge at Asamankese walking in Accra, and I screamed: “My lord!!” And he said, “Oh Captain, haven't you heard my story?” Apparently some negative allegation had led to interdiction and he had been appearing before disciplinary committees more than two years running.

My Lord Chief Justice, be bold fearless and do justice. Put your foot down and finally solve the problem of the many judges who were affected by the bogus fraudulent Anas expose. I honestly believe that your predecessor judge Georgina Wood was most unfair in her treatment to them – their lawsuits against the judicial service got mixed up in adjournments, dockets not being traceable and so on. It is very bad.

Justice Anim Yeboah, for more than four years you sat on the Disciplinary Committee of the General Legal Council and so you can agree with me that a host of petitioner complaints and accusations are often FRIVULOUS and untenable, but due process must be followed, after all that is what is called JUSTICE.

My lord, sit up. Don't be confused with invitations for opening ceremonies, addresses to big functions and so on.

The biggest problem of most criminal defence lawyers like me is the NON ANALABILITY OF TRIAL RECORDS to enable the appeal process to take place.

There are today over one hundred prisoners languishing in jail because they have been sentenced but the text of the judgments convicting them cannot be traced. How do you conduct an appeal for such persons, and the courts expect that you the convict prisoner should go chasing the judicial service for copies of the judgment!!!!

I recommend very strongly that you issue a practice directive that every Judge throughout Ghana after convicting an accused person must give a signed copy of the Judgment to the Registrar within seven days otherwise the conviction will be nullified; and it should be the duty of the judicial service to produce the trial records, not that of the accused/convict.

I have been at the Bar since 1986 and I have seen so much going on in the courts. Time and space will not allow me to write all that is on my mind, but allow me to say that it is Almighty God who has made you the CJ. Pray to Him DAILY. Ask for His guidance and protection.

Keep this my open letter very well and if and when you live through to go on retirement, pick it and re-read it and give yourself score marks. Posterity is waiting to judge you.

May God grant you a successful tour of duty.

Your good friend from Legon