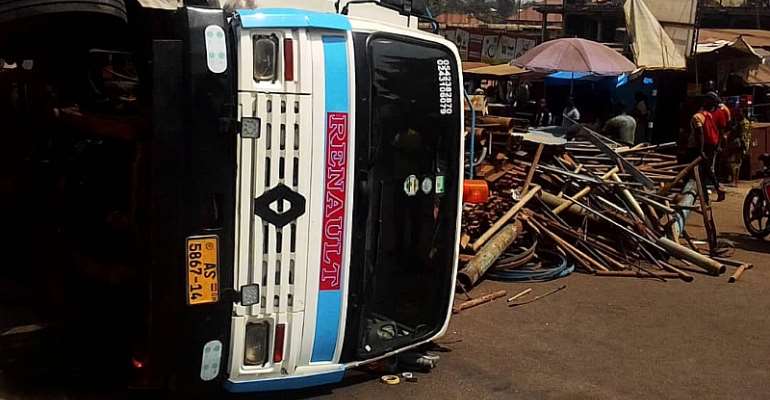 One person is feared dead after a Renault truck with registration number AS 58 67-14 suspected to have failed its brake run onto five saloon cars before fallen on the road on Wednesday, January 15, 2020 morning at Suame in the Ashanti region.

The loaded truck the truck was heading towards Suame Roundabout to offload scrapes in Tema when it veered off the road and onto the opposite side of the dual carriageway.

The drivers of the five saloon cars that were badly crashed by the truck escaped unhurt according to one of the victims. The accident caused damage to 3 private saloon cars.

Speaking to OTEC Fm’s reporter Isaac Nsiah Foster, one of the victims Oppong Michael said the Renault truck driver's brakes developed a fault and while trying to save passengers in a trotro Urvan bus swerved and run onto five private saloon cars and eventually fell on the other lane of the road resulted in road blockage which caused about five-hour traffic jam in the area.

Some residents told Otecnews that many such accidents have occurred in recent times in the same spot creating fear and panic for them due to the poor nature of the road.

According to them, potholes among others have taken over most parts of the stretch creating a difficult situation for both motorists and passenger to use it.

Chief Inspector Ayerh Ariel of Suame Motor Traffic and Transport Department (MTTD), of the Ghana Police Service told OTEC news that his team are putting measures in place to tow truck and all the cars involved away quickly to the Police station to avoid affecting the flow of traffic on road.