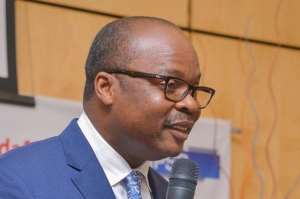 The Bank of Ghana has called on the Police Service to help it to identify hidden and unlicensed financial institutions that might be operating secretly and possibly taking advantage of vulnerable customers.

Elsie Addo Awadzi, the Second Deputy Governor of the BoG, who made the call, said although the BoG embarked on a clean-up of the Financial Sector, there could be some institutions that were not identified.

She was speaking when a delegation she led from her office organized a sensitization programme to enlighten the Police Service on their rights and responsibilities as consumers of financial products and services.

The programme was also used to seek the support of the Service to restore confidence and trust in the financial services sector.

She said the Police played a key role in helping BoG to conduct enforcement actions against financial institutions that violated the laws.

However, it was necessary to reengage them after the cleanup exercise to ensure surveillance and weed out all unlawful behaviours in the sector.

Financial services, she explained, required the BoG license to operate, therefore it was only prudent for the Police to report any institution it found operating without a license and taking money from the public or promising unassured loans to the public to the BoG for appropriate measures to be taken to control their operations.

“We also have a different approach to deal with licensed financial institutions who defraud customers or treat them unfairly,” she added.

Mrs Awadzi said one key problem identified with the cleanup exercise was the misunderstanding and loss of confidence among members of the public.

“We’ve seen too many fingers burnt in the recent past in Ghana. We’ve seen too many people lose money, and it’s our definite hope that, that doesn’t happen anymore. We are doing all we can to engage key stakeholders like the Police to enforce the laws strictly,” she noted.

As part of efforts to reduce the risks consumers go through, she said, the BoG was conducting a nationwide sensitization programme to educate them on their rights and responsibilities and the available protocols within the BoG.

Mrs Awazi advised financial institutions to respect customers and deal with them in truth and transparency.

Speaking on the steps taken by the Law Enforcement Agencies to arrest Mr Mike Nyinaku and Mr Prince Kofi Amoabeng, the Chief Executive Officers of the Beige Bank and UT Bank respectively, she said the action was in line with what the authorities might have found to be a conduct that needed thorough investigation.

“After the cleanup exercise, we passed all relevant information to the law enforcement agencies and we expect them to conduct their own investigations and proceed to do the needful if they found any behaviour to have had criminal implications,” she said.

Deputy Commissioner of Police Frederick Adu Anim, the Greater Accra Regional Police Commander, expressed gratitude to the BoG for recognizing the pivotal role the Service in cleaning up the financial sector.

He pledged the preparedness of the Service to join forces with the BoG to unveil the operations of unlicensed financial institutions.

To sensitise a larger number of the Police, he encouraged service members who attended the sensitization programme to pass on knowledge acquired to all members in their various stations.