Mission Impossible For France In The Sahel?

Fight Against Militants
By Clement Kpeklitsu 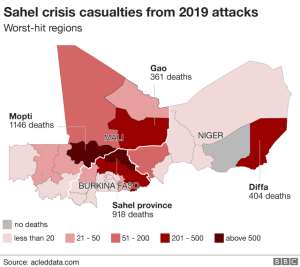 France has had an interest in the Sahel since the colonial era, when the territory of French West Africa encompassed Senegal, Mauritania, Mali, Burkina Faso and Niger.

Although Macron inherited the conflict in Mali when he took power in 2017, he has repeatedly committed to the fight against extremists in the Sahel. Indeed, he travelled to Mali to meet President Keita in his first week as head of state.

In a part of the world where borders are relatively porous and government and police presence in remote areas weak, militant groups have thrived in the lawless mostly-desert regions of the Sahel. Groups of this nature have staged bloody attacks on military posts in both Mali and Burkina Faso in recent months.

At least 38 French soldiers have died since France intervened in Mali in 2013, while more than 200 soldiers from regional nations in Africa and international peacekeepers were killed in September 2019 alone, with dozens more dead in attacks in neighboring Burkina Faso.

Although other European nations provide logistical support, France is the only nation with a permanent military presence on the ground in the Sahel, a presence that has been criticised by parties of both the left and the right in France.

In a statement in November, 2019, French Defence Minister Florence Parly said that now is “not the time for questioning the merit” of Paris’ military engagement in the Sahel.

But some analysts have suggested that she doth protest too much. “Since the beginning of the French military involvement in the region, everything got worse,” Jeremy Keenan, a research associate at the School of Oriental and African Studies in London, told Agence France-Presse. “There is no progress.”

The hard-left party La France Insoumise (LFI) expressed a similar view: the country needs “a serious and rational discussion to find a way out of a war, the meaning of which is lost on a large number of our fellow citizens as well as Malians themselves”, LFI MPs asserted in a public statement.

None other than France’s most senior military officer added fuel to this argument. General François Lecointre, the armed forces’ chief of staff, declared on France Inter radio that “we will never achieve a definitive victory” in the Sahel – although he insisted that France’s military operations there are “useful, good and necessary”.

Nobody trusts the G5 Sahel

France’s military presence in the region has by no means been unilateral; it has been working with allies on the ground since 2013. That year, the United Nations formed the MINUSMA peacekeeping force in Mali – one of the largest UN deployments.

However, it is also the most dangerous: more than 200 Blue Helmets have been killed in Mali. MINUSMA troops “are shot like hares”, François-Xavier Freland, former FRANCE 24 Mali correspondent and author of Mali, au-delà du jihad (Mali, Beyond Jihad), put it last year.

In an attempt to build a more long-term security solution in the region, the G5 Sahel bloc was transformed into a military alliance at Paris’ behest in 2017, bringing together forces from Mali, Niger, Chad, Burkina Faso and Mauritania.

Yet, in light of its constituent armies’ mounting death tolls amid mushrooming insurgent attacks, it is clear that the G5 Sahel is “not working”, said Thierry Hommel, director of the West Africa Future Forum at Futuribles and a teacher at the École nationale des ponts et chaussées in Paris. “It’s a coalition of armies that nobody trusts: they’re seen as inefficient and corrupt and benefitting from impunity, which is to say that they can kill anybody they like and get away with it.”

“Military figures tend to say the Chadian military is quite brave – the others tend to run away when terrorists come,” Hommel continued. “But often even the Chadian fighters don’t have guns because of corruption in procurement.”

Indeed, the Sahel states score poorly in the most recent Transparency International Corruption Perception Index: for example, Chad is ranked at 165 out of 180, and Mali at 140.

No terror attacks in Europe have come from the Sahel

Corruption is just one form of bad governance that engenders insurgent activity, said Emmanuel Dupuy, head of the IPSE think-tank in Paris and an expert on the Sahel. Countries in the region are “not paying attention to their peripheries, and this is exactly where terrorist groups have found fertile ground – in places where the state is incapable of performing its basic missions in terms of providing public services, justice and simply administering the area, you see terror groups replacing the state”, he pointed out.

In any case, the vast, sparsely populated nature of the Sahel means that “large spaces of territory there are difficult to control under the best of circumstances”, added Andrew Lebovich, a specialist in the region at Columbia University and the European Council on Foreign Relations.

Given that insurgent groups are benefitting from such “fertile ground” just south of the Sahara Desert, Paris’ rationale for its military role in the Sahel is that stabilising the region will make Europe safer by preventing jihadist groups from enjoying a safe haven in the continent’s near abroad.

Hommel argued that this thesis should be challenged: “None of the terror attacks on European soil have been committed by people coming from the Sahel. It’s good for insurgent groups there to say that they’re affiliated to people like al- Qaeda but they seem to be acting on a local level – and if they are local, they are not a threat to our security.”

Nevertheless, France has been keen to persuade other EU countries to send troops to fight in the Sahel. Thus far, only Estonia has signed up. The Baltic state intends to send 50 troops.

Warnock wins Georgia run-off against Walker to win the Senat...
42 minutes ago