The Repercussions Of Corrupt Judiciary System On The Economic, Political And Social System 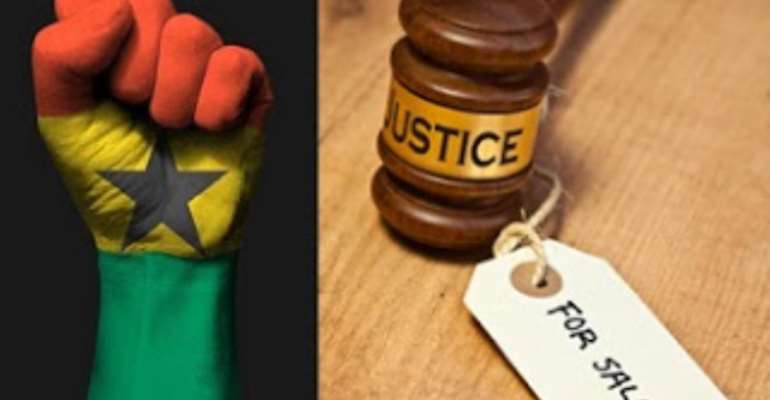 The power of Ghana's corrupt judiciary system is stronger than the strength of the Biblical Samson, photo credit: Ghana media

Probably many people like to live in a country which judiciary system is weak and corrupt, whereby offenders have an easy game, enjoy impunity, while honest people suffer.

However, the fact is a country without rules is abandoned to violence, abuse, crime, without culture and eventually becomes the victim of ignorance and human misery.

In such a nation, corruption proliferates and crimes of all kinds thrive. To be honest, like every country, Ghana has laws, unfortunately often, it seems that the country has transformed into a tax evasion haven, the law of privilege, the exchange of favours, unscrupulous business, nepotism, and corruption.

The very idea that people can commit crimes and get away with it, undermines the credibility of Ghana’s criminal system and the seriousness of our security laws, undermining citizens' trust in the legal system on the one hand and on the other in the ruling class.

Given the episodes of ineptitude, inefficiency, and corruption that we have witnessed in recent years, defining the discredit that has hit the Ghanaian ruling class unjustified would be an understatement.

Corruption and fraud led to the collapse of the banking institutions because the judiciary system has no power to pursue corruptible people.

If we are serious in the analysis of the facts, how can we even think for a moment that, a ruling class like the current one, already in itself inefficient, discredited and disconnected from civil society, solve problems?

This endogenous inability has contributed to the creation of anti-politics, which meant that Ghana is no longer perceived as a reliable country.

In a catastrophic situation like the current political atmosphere in Ghana, one of the essential remedies to restore some glimmer of hope to the Nation is the reform of the judicial system.

Justice is a vital infrastructure for the country's productive fabric to modernize and recover that competitiveness which is the pre-condition for economic and social growth.

Justice is one of the cornerstones through which the country's growth and competitiveness pass and, therefore, the functioning of the judicial system represent a fundamental element for this process, in which the whole country must commit itself.

Justice is the fundamental institution that acts as a hub for all interventions because it guarantees their effective application. Any initiative, normative and legislative, would be useless if an apparatus capable of guaranteeing enforcement did not exist and did not work.

Justice deals with the rules, which are the fundamental condition for being able to live in order in a community.

The state is the prerequisite for citizens to live in peace and prosperity, to do their job, to invest by relying on that system of rules which, however, must be able to count on a system of efficient and effective application.

A country where the rules are unreliable because their enforcement does not work is unreliable and is not credible either inside or outside its borders.

The functioning of the judicial system is not a matter that concerns only magistrates, lawyers or operators, but it is a matter that has very important repercussions on the economic, political and social system.

If we operate in a context where there is no respect for the rules, meritocracy cannot arise and the result is a lack of quality which then reflects on the performance of a country totally abandoned to itself and easy prey to crime.