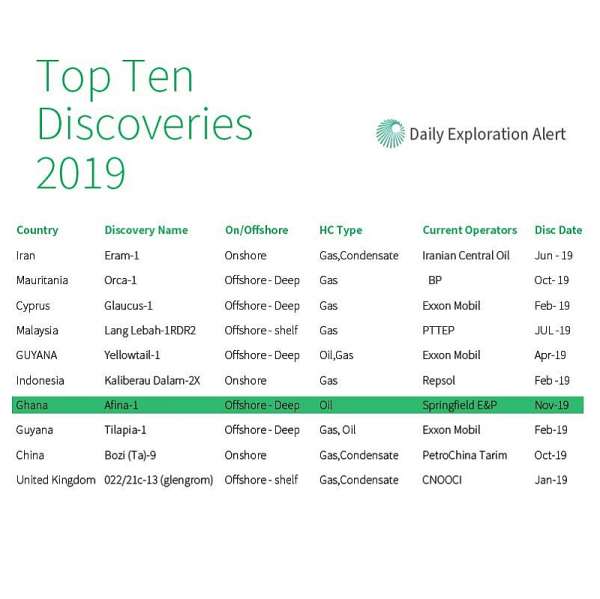 Ghanaian Energy Company, Springfield Exploration and Production Limited's Afina well discovery in November has been named amongst the top ten most significant global hydrocarbon discoveries in 2019.

The list, compiled by IHS Markit, a United Kingdom based world class intelligence gathering organization with over 5000 analysts, data scientists, financial experts and industry specialists also positioned Springfield as one of five global oil companies that made discoveries in Deepwater and the only indigenous company on the continent to do so.

The other discovery in Africa was BP's Orca-1 in Mauritania. Springfield's Afina-1 well discovery in its West Cape Three Points Block 2 in November 2019, was considered very significant and more than doubled its proven oil reserves to 1.5 billion barrels and added 0.7tcf of gas to the existing discoveries.

The other major discoveries were by Exxon Mobil in Cyprus and Guyana, Repsol in Indonesia, Petrochina Tarim in China and CNOOCI in the United Kingdom.

The rest are PTTEP in Malaysia and Iranian Central Oil in Iran.

Commenting on the acknowledgement, Springfield Chief Executive Officer, Kevin Okyere posted on LinkedIn that 'while celebrating the past, we look forward to even greater achievements, knowing what lies ahead. And we do know that all of this is possible because we work together with an amazing team of dedicated and committed people; from regulator, partners, contractors, suppliers to our employees.'

Springfield is Operator of the West Cape Three Points Block 2 with 84% interest while Ghana's National Oil Company, GNPC and its Exploration Unit, EXPLORCO together hold the remaining 16% interest.