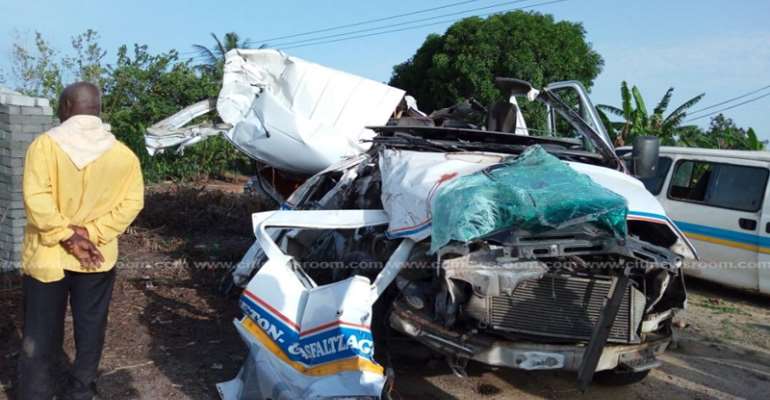 While human error has largely been blamed for the rising road crashes recorded over the world, arguments have been made for the absence of requisite road infrastructure to aid safe travels.

Between 1991 and 2018, Ghana has lost over 46,000 people to road crashes. Analysts say road phenomenon has become the leading cause of deaths among Ghanaians.

Just yesterday [Tuesday], a vehicle collision which happened at Dompoase in the Central Region left 35 people dead and several others severely injured.

Speaking on the Citi Breakfast Show on Wednesday, the Deputy Director in charge of driver training, testing and licensing, at the Driver and Vehicle Licensing Authority (DVLA), Kafui Semevo, opined that properly trained motorists go hand in hand with the provision of necessary road infrastructure.

“Sometimes when you take a stretch of road and find enforcers on the stretch, quickly you see people complying. But it shouldn't be that someone is watching you before you start to comply. The interventions we are putting in place should go beyond the human factor at the moment and also look at our road engineering.”

“It is about time we started looking at how to have dual carriages so that head-on collisions would not be things that we should be referring to because head-on collisions actually increase the number of people who die in a crash. I think that we should continue to look at the driver side but also pay attention to other matters that contribute to road crashes. Once we do that, all these numbers we are recording will drop drastically. Crashes may happen but people shouldn't be losing their lives,” he noted.

One of the most recent road crashes in the country is one that happened at Dompoase near Elmina in the Central Region on Tuesday dawn.

According to the Public Relations Officer for the Ghana National Fire Service, Assistant Division Officer Abdul Wasil Hudu, the crash occurred when a vehicle moving from Accra towards Takoradi attempted to overtake a vehicle ahead in a sharp curve and collided with an oncoming vehicle en route to Accra from Takoradi.

The bodies of the deceased persons were then deposited at the Cape Coast Teaching Hospital.

Meanwhile, scores of family members gathered at the Hospital today [Wednesday] to identify and collect the remains of their dead relatives who passed away in the crash. Road crashes in Ghana

Statistics from the National Road Safety Commission shows that Ghana loses over 230 million dollars annually due to road crashes.

Poor driving skills, gross indiscipline by drivers and unworthiness of cars on Ghanaian roads according to the Commission could be blamed for the unfortunate incidences.

Within the last 28 years, about 46, 284 Ghanaians have been killed in road accidents nationwide.