Inclusive Education In Ghana: The Misconceptions, Confusions And Frustrations – The Story Of Yaw Nyame 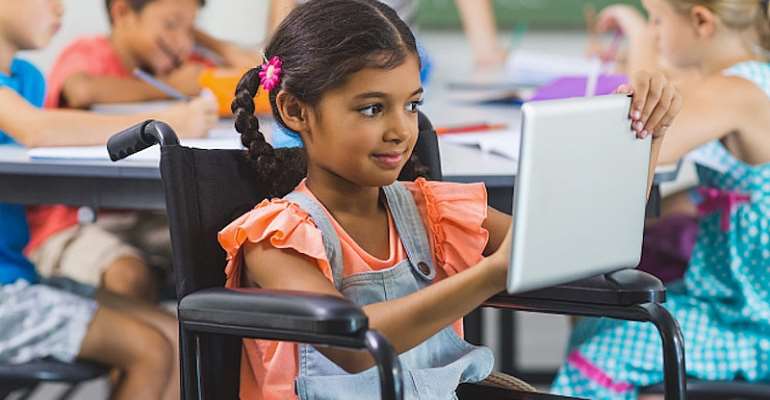 Yaw Nyame is a 6-year old boy with mild cerebral palsy, so he experiences some challenges with general posture, movement of his hands and blurred speech. His parents, who hail from Donkorkrom in the Eastern Region, were at first not enthusiastic about sending Yaw to school because of “his disability.” However, a little over a year ago they noticed he was getting along well with few friends he plays with in the community.

The head-teacher was very reluctant to admit Yaw on the grounds that he is a “special needs child” and the school does not have the support he may need. In attempts to convince the parents, he called in the class one teacher to indicate to the parents whether Yaw can be included in his class.

The teacher explained to the parents that Yaw will have serious challenge with writing with his hand, and so it will be difficult for him to cope with the pace with which the pupils are expected to copy from the black board. He continued that if he has to adapt the whole class to his pace, it will negatively affect the other pupils in his class. Consequently, the school head suggested to the parents to send him to a special school which has boarding facilities.

The parents were very much disappointed and angry that the boy has been refused admission to their community school where his playmates (at home) are enrolled. Unhappy with the community school's refusal to admit Yaw, they approached a social welfare officer for advice. On his part, he advised that if the parents did not want to send their boy to a special school because they want him to be interacting frequently with children with disabilities, then a better option would be an Inclusive School (private school) near the district capital. He explained, in that school, even though both children with and without disabilities are on the same school compound, those with Special Educational Needs (SEN) have their own classrooms so they do not have to struggle with the pace of pupils without SEN. He explained that in this school, Yaw will have the opportunity to frequently play with pupils without disabilities during break times, so he can still improve on his self-assertiveness which the parents so much desired. While the parents understood his suggestion as a better option, they were frustrated in the sense that the school does not have boarding facilities so they have to either find someone in the school location whom Yaw would stay with or transport him say 2-3 times a week from Donkorkrom to the school and back. The parents of Yaw admit they have heard about inclusive education in Ghana, and how regular schools are expected to admit all categories of children including those with mild to moderate disabilities. However, they feel the reasons given by head of their community primary school are quite important and put things out of his control. Some six months down the line, the parents are still contemplating how to get formal education for Yaw Nyame in a setting that offers him better chance to develop social and adaptive skills for independent living in the future.

Misconceptions & Confusions
The concept of Inclusive Education (IE) is geared towards offering opportunities to all children to participate in regular school learning. It offers hope to children of differing backgrounds – disability, orphans and vulnerable children, ethnic minority, migrant, etc - to access formal education in regular schools. The concept is good in all intents, looking to correct years of systemic or institutional abuse of the human rights of children with special educational needs. Inclusive Education seeks to lift high the “human rights” face of a society that often uses vulnerability and special needs to justify discrimination and exclusion. However, there is widespread confusion or misunderstanding of Inclusive Education amongst many stakeholders at different levels in society. A focus to clarify these confusions or misunderstandings is essential to making the laudable concept of inclusive education to be realised in practice.

In spite of over a decade of introducing inclusive education in Ghana, many decision-makers at national and sub-national levels in the country continue to hold on to the old tradition that a means to fulfill the rights of children with disabilities or learning difficulties to education is to have special schools where children with disabilities are enrolled and learn together. This is the case of Segregation where children with disabilities are seen as 'being different' from those without, and so are separated from them, resulting in denial of opportunities for the two groups of children to interact and bond well to facilitate a process where they grow together to a future of inclusivity. Unfortunately, these decision-makers who are proponents of special schools do not advocate for the establishment of “special industries or organisations” where learners who graduate from special schools can be employed. Thus, being segregated through the special school system only makes it harder for persons with disabilities/learning difficulties to look for formal employment in future as many employers see them as 'being different' from other employees.

The supposed “Inclusive Education School” suggested by the Social Welfare Officer is a case of misconception. In fact, the description of the school puts it in the group of Integrated Schools. It is a case of integration where although both children with/without disabilities or learning difficulties are located on the same school compound, they do not learn together in the same classrooms. This is contradiction to the concept of inclusive education. By the concept of Inclusive Education, children with disabilities/learning difficulties are to be seated in the same classrooms to be taught by same teachers, sometimes including support teachers. True inclusive education embodies bringing learners with/without Special Educational Needs together in regular classroom where there is a shared sense of purpose and responsibility. Integration is not Inclusion.

The class teacher in Yaw's story seemed confused about providing the needed support to children with SEN. Inclusive Education has no requirements for learners with SEN to keep up pace with learners without. Similarly, the IE concept does not put a burden on regular learners to wait for learners with SEN to catch up with them. It is worth mentioning that in some cases, support teachers may be needed, but also most regular teachers have received basic training to provide classroom support to children with SEN. Following the development of Ghana's Inclusive Education Policy, the State has taken steps to ensure the needed training are given to all classroom teachers to be able to manage inclusive classrooms. A lot of awareness-raising and public education continues to be conducted to help remove all the confusions and misunderstandings about inclusive education. In Yaw's case as narrated above, an Assistive Device may be the only needed support to enable him participates well in regular classroom learning.

Inclusive Education involves bringing the support services to the child rather than moving the child to the services and requires only that the child will benefit from being in the class rather than having to keep up with the other pupils/students.

The Writer is Auberon Jeleel Odoom, the National Co-ordinator of Inclusion Ghana.