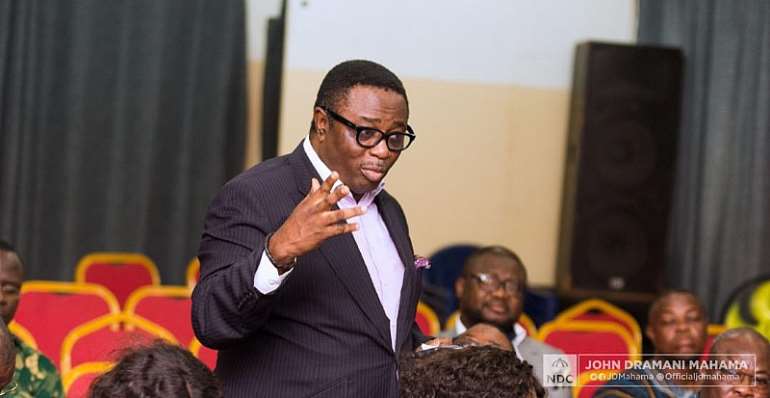 The Director of Elections of the National Democratic Congress (NDC), Elvis Afriyie Ankrah, has accused the Electoral Commission (EC) of trying to use unconventional means to push for the compilation of a new voters’ register ahead of the 2020 general elections despite concerns from some stakeholders.

“They are being inconsistent, they are not being sincere and because they are not being truthful, by next week the narrative will change again. First of all, there is no consensus, the issues that they are raising do not make sense and it is too costly as compared to having an upgrade,” he told Godfred Akoto Boafo on Citi TV’s current affairs programme, Face to Face on Tuesday.

Officials of the Electoral Commission are preparing to compile a new voters’ register ahead of the 2020 polls; a decision that has generated mixed reactions.

Whereas some political parties backed the decision by the EC, others including the National Democratic Congress have resisted that the move claiming the decision is ill-timed and a waste of taxpayers money.

Officials of the EC had insisted that the decision to compile a new register was agreed by the various political parties as did not object to the proposal when it was tabled at Inter-Party Advisory Committee (IPAC) meeting on March 27, 2019.

But Mr Afriyie on Face to Face vehemently denied the EC’s assertion.

“We have never, not once, had a formal IPAC meeting that the EC has tabled the question of a new biometric register…On the 27th of March, when we had an IPAC meeting…it was not on the agenda. There were three major things on the agenda: preparations for 2019 district level elections and referendum, inspection of political party offices and updates on the compliance of the parties with audit requirements. So these were the three major issues on the 27th of March meeting and we discussed the issues for three and half hours.”

Mr Afriyie argued that some utterances from officials of the electoral management body show that the EC cannot be trusted.

“They talked about the three things that were on the agenda but they mentioned [in passing] that the commission will compile a new voters’ register ahead of the 2020 presidential and parliamentary elections. Where was this on the agenda? Where was this deliberated on? So, this is evidence for you that the commission sought to lie and misinform the public that political parties had agreed at IPAC,” Afriyie Ankrah argued.

The Electoral Commission has expressed readiness to engage the various political parties, especially those opposing the decision to compile a new voters' register ahead of the national polls this year [2020].

In as much as most of the parties in the country are backing the decision for a new register, a total of eight opposition parties are against the move and have vowed to use any means possible to have the EC abort the plan.

They embarked on a massive demonstration in Tamale last Saturday with an assurance to stage such exercise in Kumasi and Accra in the coming days.

But speaking to Bernard Avle recently on the Point of View on Citi TV, the Deputy Chairperson of the Electoral Commission, Dr Bossman Asare said the Commission is always open to discussions with the various political parties with regards to the new electoral register.

“As far as the EC is concerned, our doors are open. We will still engage the parties. Very soon, we will have an IPAC meeting to call on the parties for us to look at the modalities; how we are going to do it. So we wish that all the parties will come on board. If there are certain ways we can do certain things to mitigate the concerns of others, the EC is ready to do that,” he stated.

Parliament has approved about GHS390 million for the EC to procure a new biometric system which has facial recognition technology and also compile a new voters' register this year.