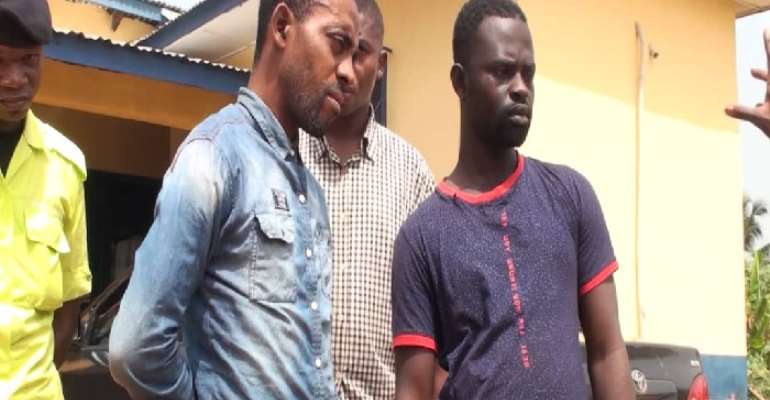 Two men accused of robbing a female mobile money vendor of GHȼ 900 in a moving taxi are in the grips of the Fomena District Police Command in the Ashanti Region.

Kwadwo Sarfo, 20, a cabbie, and Kofi Agyemang, 37, a steel bender, both residents of Kumasi-Abrepo, had picked up the victim, Priscilla Darko, at Fomena in the afternoon of January 9, 2020, with the intension of taking her to Old Ayaase, a village near Fomena.

Supt Albert Fii Ochil, Fomena District Police Commander, said somewhere in the middle of the road as they drove toward Ayaase, Kwadwo Sarfo pulled over as Kofi Agyemang attacked her and managed to dispossess her of GHȼ 900 which she had withdrawn from a bank.

According to the police chief, the duo had placed surveillance on the victim and trailed her from the banking hall to the Ayaase lorry station, where she was picked up.

She was sitting in one of the station's taxi, waiting for other passengers to join her when Kwadwo Sarfo pulled over with his taxi and asked her to join, if she was in a hurry.

Supt Ochil said the lady, without suspecting any foul play budged to the offer.

Soon after she boarded the taxi then Sarfo's accomplice, Kofi Agyeman, also joined the car.

He said the robbery happened just before noon, and added that Priscilla raised alarm and which attracted some other taxi drivers who ply on the road, leading to the arrest of the two.

Supt Ochil indicated that they would soon be arraigned before court.