Militia chiefs on trial in C. Africa over UN killings 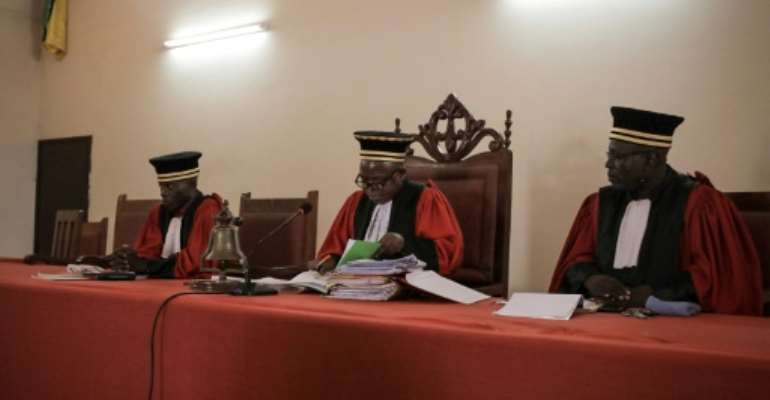 Thirty-one militiamen went on trial for a massacre in 2017 that left dozens dead including 10 UN peacekeepers, according to UN figures. By FLORENT VERGNES (AFP)

Two militia chiefs and 29 of their men went on trial in the Central African Republic on Wednesday over a massacre of civilians and 10 UN peacekeepers in a southeastern town in 2017.

According to the UN, 72 people were killed, 76 were wounded and 4,400 people fled their homes.

The militia group especially targeted members of the Muslim community who had taken refuge in the town's Catholic church.

The two reputed leaders are Crepin Wakanam, a self-described general whose nom de guerre is "Pino Pino", and Kevin Bere-Bere, who had the rank of lieutenant.

They went on trial in the capital Bangui for "crimes against humanity, war crimes, looting and murder", public prosecutor Eric Didier Tambo told AFP, calling it a "very big case".

The trial is expected to last a week.

The prosecution said the group carried out a "massacre of numerous civilians" -- the exact number is not specified -- and the killing of "10 (UN) Blue Helmets", comprising six Moroccans and four Cambodians.

CAR, one of the world's poorest countries, has been grappling with violence since 2013.

The "Pino Pino" militia was one of the predominantly Christian and animist armed groups that sprang up to combat a mainly Muslim rebel coalition, the Seleka.

Brutal fighting brought the country to the brink of sectarian war, prompting intervention by France, the former colonial power.

But armed groups control most of the country, frequently fighting over its rich mineral resources.

The government and armed groups have repeatedly signed agreements purporting to bring peace.

The most recent, signed on February 6 last year, has eased the intensity of the violence but not ended it.

The country is also struggling to punish those responsible for mass killings.

Bere-Bere turned himself in to a MINUSCA base in January 2018, saying he sought their protection against his former chief.

Four months later, "Pino Pino" was arrested with 33 followers in the neighbouring Democratic Republic of Congo, which then extradited him.

"Their presence at this trial demonstrates that Central African justice is reaffirming its will to fight against impunity," said the head of the national League of Human Rights, Joseph Bindoumi.