Islamic State replaces al-Qaeda as Enemy No. 1 in Sahel 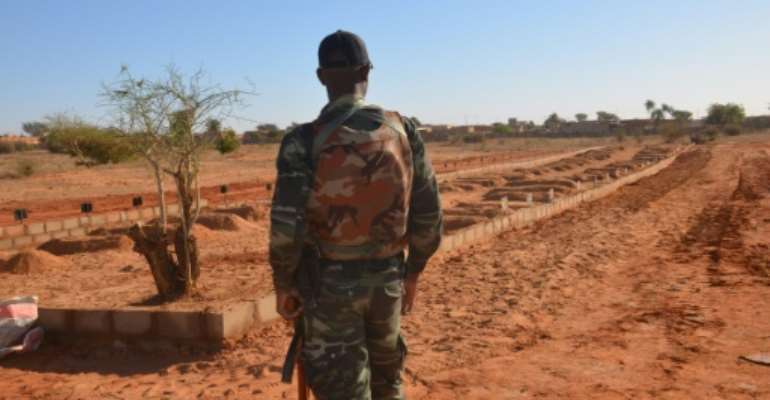 The graves of 71 troops killed in an attack in Niger last month. By Boureima HAMA (AFP)

Brutal attacks that have killed nearly 300 people in less than two months have propelled the Islamic State to the status of the Sahel's most-feared jihadist group, eclipsing al-Qaeda, experts say.

The vast fragile region on the southern rim of the Sahara has been battling an escalating insurgency by violent Islamists, beginning in Mali in 2012 and then spreading to Niger and Burkina Faso.

Until recently, groups under the banner of al-Qaeda were in the forefront of the bloodshed.

But their position has now been overtaken by an Islamic State (IS) affiliate, providing the group with an image of resurgence in West Africa after its decline in Syria and Iraq.

"The priority is the Islamic State in the Greater Sahara (ISGS)," French President Emmanuel Macron declared on Monday at a summit gathering France and its five Sahel allies -- Chad, Burkina Faso, Mali, Mauritania and Niger.

The ISGS "has emerged as our main enemy, against whom we should focus our struggle," Burkina President Roch Marc Christian Kabore said on Facebook.

"Everyone has probably underestimated the ISGS," said Mahamoudou Savadogo, a Burkinabe researcher at a Senegal-based think tank, CERADD.

"There has been a major rise in (its) power."

The ISGS leapt to world prominence after an ambush near the village of Tongo Tongo in Niger in 2017 that claimed the lives of four US special forces and four Nigerien troops.

Its leader is Adnan Abu Walid al-Sahraoui, whose nom de guerre derives from his birthplace in the Western Sahara.

His history of militancy dates back to fighting in the Polisario Front, which aims to end Moroccan control over the Western Sahara.

He became a leader of the Movement for Oneness and Jihad in West Africa (MUJAO), which then merged with a group led by one-eyed Algerian jihadist Mokhtar Belmokhtar, forming Al-Mourabitoun.

A picture released last May by Islamic State's Aamaq News Agency purporting to show fighters celebrating after an attack on an army patrol in Niger. Its authenticity cannot be verified. By HO (AAMAQ NEWS AGENCY/AFP)

He then broke with Belmokhtar to declare allegiance to IS, which the group recognised in 2016.

Savadogo said that from then until 2018, the ISGS prepared the groundwork, recruiting followers and raising funds -- and putting down roots in a region where the borders of Burkina, Mali and Niger meet.

That time spent in training has led to the bloodiest attacks in the history of the insurgency in the Sahel, all of which have been carried out in a range of 200 kilometres (120 miles).

In November, two clashes in Mali, at Tabankort and Indelimane, claimed the lives of 92 soldiers. In December, 42 people -- 35 of them civilian -- were killed in Arbinda in Burkina, and 71 in Inates, Niger. And on January 16, 89 troops were killed in Chinegodar, Niger.

Map of Mali, Niger and Burkina Faso, locating the tri-border region where jihadist attacks have been intensifying. By Laurence SAUBADU (AFP)

The target is typically a remote military base, which is attacked by dozens of jihadists arriving on swarms of motorbikes.

They cut off the camp's communications, pound the site with mortars, kill as many soldiers as possible and then disappear before the army can fully respond.

"The latest attacks seem to show that the group has acquired skills in command, control and coordination that it didn't have before, with group leaders able to carry out major operations," a French military source said with concern.

A security expert in the Malian capital Bamako said the ISGS, like other jihadist groups in the Sahel, uses "ad hoc" fighters to beef up its ranks.

"For every trained, radicalised fighter, there are two or three proxies (allies) who are hired just for the operation," the source said.

The hard core of ISGS is probably no more than 200- or 300-strong, specialists say.

"They use poachers, criminals, traffickers" with deep knowledge of the local terrain, Savadogo said.

The ISGS gets technical help from another IS affiliate, the Islamic State's West Africa Province (ISWAP), said Matteo Puxton, an independent analyst who spoke on condition of using a pseudonym after receiving threats.

According to IS propaganda outlets, the ISGS was incorporated into ISWAP in mid-2019. ISWAP also has a dissident faction of Nigeria's ruthless Boko Haram.

France last month deployed armed drones to the Sahel in its campaign to counter the insurgency. By DaphnÃ© BENOIT (AFP)

"IS headquarters has taken over the ISGS. You can see that in the propaganda, the technical skills," Puxton said.

"The level of ISGS attacks which were carried out in 2015 has been transformed. Their operations are sophisticated, and for the first time in (ISGS's) history, there are long videos, put together by IS's central propaganda unit," he said.

Jean-Herve Jezequel, head of the Sahel project at the International Crisis Group (ICG) think tank, said IS was "easy to flag as an enemy, given its reputation for violence -- in terms of image, you really have a perfect foil there."

But, in fact, this reflects the situation on the ground, where IS affiliates are on the rise, "including in the former strongholds of al-Qaeda," he said.

The IS "is flying high" in the Sahel, he said.

"The reasons are complex and hard to decipher, but stem in part from the fact that it gives lots of autonomy to the groups that join it."