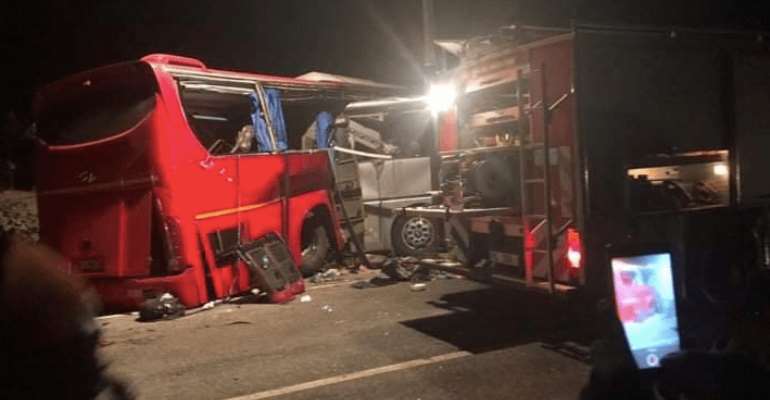 The Cape Coast Teaching Hospital is calling on the public to help identify the 34 persons who were killed in Tuesday's road crash at Dompoase in the Central Region.

The accident, which involved a head-on collision between two buses travelling to Takoradi and to Accra respectively at Dompoase near Elmina in the Central Region, left 34 dead instantly and 57 others seriously injured.

Speaking on the Citi Breakfast Show, the Public Relations Officer of the Cape Coast Teaching Hospital, Frederick Nyankah, added that out of the 57 injured persons, over 30 of them have been treated and discharged so far.

“The total number of victims we received from the accident scene is ninety-one. Out of the ninety-one, we have thirty-four who have been confirmed dead and then we have fifty-seven who are going through various levels of treatment. Yesterday, as at 1pm, thirty-one out of the fifty-seven were discharged and in the evening, before I left the office, a number of them were also being prepared to go home, but all of them are stable and very conscious are responding to treatment very well,” he said.

“If you have any relative who travelled on Monday from Accra to Takoradi or Takoradi to Accra, and you have not heard from them, please come to the office and let's go through the process of identifying them. Maybe your relative may be part of them,” he added.

Public Relations Officer for the Ghana National Fire Service, Assistant Division Officer Abdul Wasil Hudu, said the crash occurred when a vehicle moving from Accra towards Takoradi tried to overtake a vehicle ahead in a sharp curve thereby, colliding with an oncoming vehicle en route to Accra from Takoradi.

“We had a distress call around 12.25am this morning and a quickly our rescue team was dispatched to the scene and when they got there, they realized that there were two buses. When we did the rescue, those who died on the spot were about 29; made up of 15 males and 14 females. There was also one little girl, less than 1 year old,” he said.

He added that 5 of them were subsequently confirmed dead.

Meanwhile, President Nana Akufo-Addo has expressed his sympathies to the families and loved ones of all persons who perished in the accident.