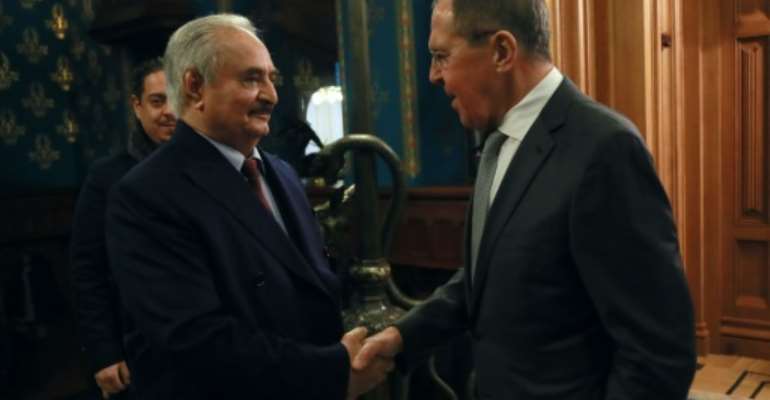 Military strongman Khalifa Haftar's reluctance to sign up to a Turkish-Russian orchestrated ceasefire accord underlines the complexity of Libya's conflict and pressures exerted by key foreign players, analysts say.

He left Moscow on Tuesday without signing a permanent truce aimed at ending nine months of fighting against the UN-recognised Government of National Accord (GNA) led by Fayez al-Sarraj.

His abrupt departure was a setback for an international diplomatic push, after Sarraj had signed up to halting Haftar's offensive to seize Tripoli from the GNA.

For Emad Badi of the Washington-based Middle East Institute, there are two plausible explanations for Haftar walking away.

"Either he didn't sign because he personally decided not regardless of the consequences, or... one of his backers guaranteed him support even if he did not sign".

Abdelqader el-Rehebi, a Libyan political analyst, said the motivation for Haftar to hold off on signing a definitive ceasefire deal was clear.

"Abu Dhabi, Riyadh, Cairo and Paris, the direct or indirect supporters of his military campaign... were not agreed" on the deal. "This makes his refusal logical."

Rehebi said Haftar's foreign backers had pressed him to keep up the Tripoli offensive "and, in return, (they pledged) to keep up their political and military support".

Egypt, for example, a regional rival of Turkey which opposes Ankara's support for the GNA, "rejects any consensus or reconciliation between the two camps that would permit a Turkish presence on the Libyan scene", Rehebi said.

Peter Millett, a former British ambassador to Libya, tweeted that Haftar's stand was a signal that the general and his backers "still think he can win militarily".

But Mohamed Eljarh, another Libyan analyst, tweeted that Haftar had come under "enormous pressure" to sign.

"Once again, Haftar proves he is not bound by the wishes of his backers & those that sympathize with him. Not #Cairo, not #AbuDhabi, and not #Moscow. #Libya," Eljarh wrote.

A former US special envoy to Libya, Jonathan M. Winer, said the strongman's actions were true to form.

"That has been what I have both observed & been told by senior foreign officials of states that supported him in the past. A dictator is beholden to no one," he tweeted.

Critics accuse Haftar of aiming to install a new dictatorship in Libya, which has been in chaos ever since the 2011 uprising that ousted and killed longtime ruler Moamer Kadhafi.

"We will not hesitate to teach a deserved lesson to the putschist Haftar if he continues his attacks on the country's legitimate administration and our brothers in Libya," he said.

The general, who supports an administration based in eastern Libya, set his sights on Tripoli last April after conquering much of the south, in part by rallying powerful local tribes.

For Federica Saini Fasanotti of the Brookings Institution, "the price of this siege (of Tripoli) is also very expensive for Haftar."

He "sees himself indebted to foreign countries that have supported him, but above all to the inhabitants" of eastern Libya.

"Families who lost their children in this war operation await a clear response from Haftar that can only end with victory, at least on paper. Without that, it will be very difficult" for him, she said.

Other analysts speculated that a secret annex to the ceasefire accord between Moscow and Ankara could explain Haftar's opposition.

"Possibly, the two countries might have some 'under the table' deal for a possible new political lineup in Libya," Claudia Gazzini of the International Crisis Group told AFP.