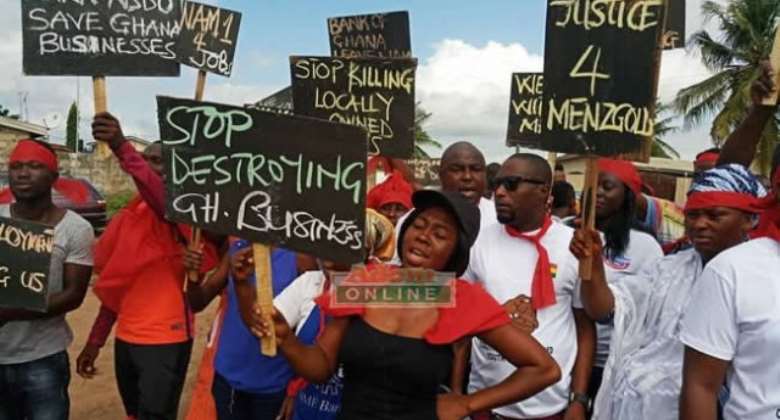 Five aggrieved Menzgold customers who were among the 92 arrested for unlawful entry into the residence of Nana Appiah Mensah aka NAM1 have been granted bail by the Madina Circuit Court.

The five who appeared before the court on Tuesday were admitted to a bail sum of GH â‚µ 3,000 and a surety each.

Police on Wednesday, January 8, 2020, arrested 92 aggrieved customers of the troubled gold dealership who had marched to the residence of Nana Appiah Mensah, popularly called NAM1, to demand their locked up investments.

Four charges were leveled against them; unlawful entry, forceful entry, unlawful assembly and conspiracy to commit a crime.

They pleaded not guilty to the charges.

Speaking to Joy News, lead counsel of the aggrieved customers, Ato Quaye Sam, explained that the actions of his clients were justified, as NAM 1 had failed to provide them with adequate information as to how their monies would be distributed to them.

“They went to NAM one’s house to inquire about the 200 investors whom he alleged he has paid.

“Because all those who have been affected have an association and they have leadership. And so if you pay one person, the leadership would know.

“That was exactly their motive. You’d realise that these are responsible individuals who have invested their hard-earned resources in a company that they thought was a good company. And so when there have been challenges they have every reason to seek clarification because no information is coming from anywhere,” he said.

According to him, only five have been able to receive bail because the summon for them to appear in court only reached them a day before the actual court date, thus most of them could not abandon their schedules to come.

“Unfortunately their leaders received communications just yesterday that they have to appear in court. And most of them live in the Ashanti Region, Western Region, Central Region, across the length and breadth of this country so they didn’t have time to come. Only five heard the information and came. So those five have been charged individually,” he said.

Lawyer Ato Quaye Sam said the case has been adjourned to February 11.

However, he called on the government to intervene in the situation and find an amicable solution to make everyone happy.

“Even if they do not get all their investments because they also took some risk and government is willing to find a way to meet them halfway or somewhere reasonable I am sure all Ghanaians would be happy. But as it is going now trying to imprison them as though they’re criminals, I think it is very unfortunate.”

Museveni apologises over son's Twitter rant on Kenya
49 minutes ago

Paramount Chief of Bunkpurugu commends Bawumia for his good ...
58 minutes ago