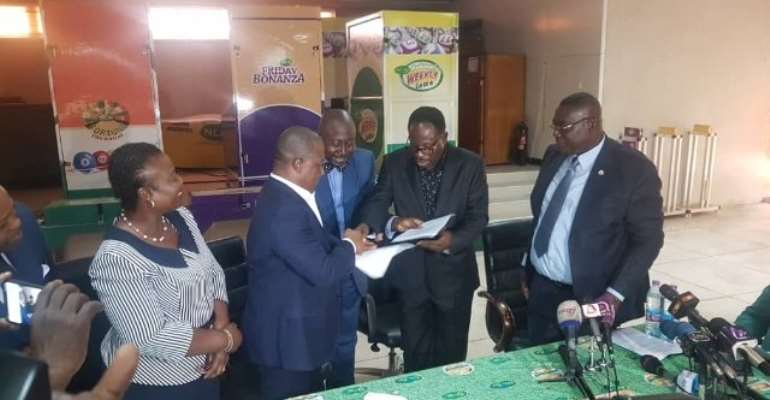 The leadership of the Ghana Lotto Operators Association (GLOA), the umbrella organisation championing the rights of private lotto operators, has agreed to be regulated by the National Lottery Authority (NLA).

The NLA will be regulating the private lotto operators under Act 844 and Section 2 (4) of Act 722 of the National Lotto Act.

In a joint statement issued by both NLA and GLOA, the two parties expressed gratitude to the Government and the Police CID for providing the enabling environment for reforms in the lottery sector.

Read the joint statement issued by the two parties below.

3. Pursuant to Section 22 of Act 844, VAG licensed five (5) Private Sector Operators (PSOs) to operate the VAG Lotto upon agreed terms and conditions which committed the five (5) PSOs to make huge financial commitments towards the operation of the VAG Lotto.

5. By the ruling of His Lordship Francis Obiri J, the Court upheld the right of VAG to operate its Lotto, but “in accordance with” the National Lotto Act, 2006 (Act 722), thereby recognizing the regulatory function of NLA over lotteries in Ghana. The Court process delayed VAG Lotto operations and rendered the five companies unable to operate the VAG Lotto.

7. In February 2018, the Board of NLA caused an advert to be placed in some newspapers, including the two national daily newspapers, inviting Private Sector Lotto Operators to apply to operate an NLA approved Banker-to-Banker Lotto under Act 722. Several PSOs responded to the advert, paid the prescribed Licensing fees and some submitted the required Security Guarantees.

8. After a year of not receiving their licensing certificates from NLA, this state of affairs incensed PSOs to organise a press conference in Accra. This press conference was seen as a national security threat according to the National Security Apparatus, Police CID and the Government at large. After an invitation to the Bureau of National Investigations to give their statement, the PSOs and NLA were subsequently invited to mediation at the Police CID Headquarters in Accra in October 2019, to resolve the impasse.

9. After four meetings, the parties agreed to set up a Joint Technical Committee made up of four representatives each from NLA and the PSO to resolve the impasse.

10. After exhaustive deliberations by the Joint Technical Committee, spanning eight weeks, the parties agree as follows:

i. NLA shall restore the PSOs who previously held licenses issued by VAG under new terms and conditions with effect from January 1, 2020. Under the terms of this contract licensed PSOs will migrate from paper-writing to an I.T. platform for effective monitoring, regulation, and more revenue mobilization to the State.

ii. The NLA, in place of its advertised Banker-to-Banker Lotto operation under Act 722, for which fees were paid, has offered qualified PSO the opportunity to participate in the 5/90 Fixed Odds Game, under the full regulation and supervision of the NLA, in accordance with Section 2(4), to ensure increased private sector lotto revenue to the State.

iii. The Parties shall execute two (2) separate Contracts covering the qualified PSOs operation of the VAG Lotto under Act 844, and qualified PSO participation in NLA 5/90 Fixed Odds Game in accordance with Section 2(4) of Act 722.

iv. The Parties have planned a nationwide sensitization campaign in January 2020 to educate the lotto public, the general public and all citizens on the Lotto Laws of Ghana, duties and responsibilities in modern lotto operations; and targeted training for sales agents and writers. This sensitization will also help explain NPP Government efforts in resolving this 30-year impasse on Private Sector Participation in Lotto, which has created upheavals for all governments since 1992.

v.To ensure smooth implementation of the roadmap towards the successful adherence to the signed contracts, the Joint Technical Committee has put in place Joint Dispute Resolution Mechanisms, to forestall unilateral breaches, unfavourable media publicity or adverse actions that may create national security concerns. NLA shall provide a detailed compliance manual to guide the effective regulation of Private Sector participation in Lotto.

The Board of NLA and the Leadership of the Ghana Lotto Operators Association (GLOA), the umbrella organization championing the rights of the Private Sector Lotto Operators in Ghana, wish to extend their gratitude to the Government of Ghana and the Police CID for the opportunity given to bring ground-breaking reforms to the lottery sector for greater employment generation; for ensuring that the employment rights of ordinary Ghanaian citizens are upheld at all times; and for making it possible for private sector participation in lotto to contribute significantly to national development.