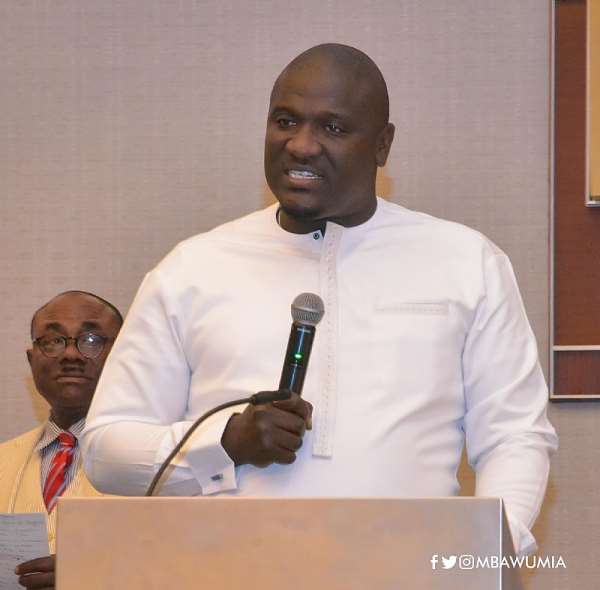 The Deputy Minister for Roads and Highways, Hon Anthony Abayifaa Karbo, has issued a clarion call to all Ghanaians, especially the youth and women, to actively support President Akufo-Addo to win a second term in order to continue with his policies and programmes that are reducing the suffering of Ghanaians.

Hon Karbo, who is also the MP for Lawra, is convinced that President Akufo-Addo is a “visionary, bold, courageous leader” and is one of the most consistent politicians he has ever known.

Speaking at a Town hall meeting organised by the USA branch of the NPP in Dallas, Texas, on Saturday 11th January, 2020, Hon Karbo praised President Akufo-Addo for thinking of the next generation, not the next elections, in the kind of policies he is implementing.

“We have a President who is not thinking about elections tomorrow. President Akufo-Addo is putting in place generational legacies that many young people will grow one day to see. That is the type of President we have. How can we even think of (former President) John Mahama, NDC, Asiedu Nketiah back running this country again?

Alluding to what made him buy into the Akufo-Addo vision, Hon Karbo revealed:

“Those of us who worked very closely with him knew that he had this burning desire, this plan, this dream, that he wanted the Ghanaian people to give him the opportunity to implement… The things he is doing today are things he said in 2008. Many people have forgotten. Akufo-Addo is one of the most consistent politicians I have seen, known or worked with.

“I asked him sometime back, in 2007, when we had 17 people contesting to be flagbearer of the NPP, why he wanted to be President, and that answer alone kept me committed to the cause. He said, he never understood why children born in the south of Ghana and those born in the north do not have equal opportunities. That struck me. And it is true. The difference between the time it took to produce a graduate from the north and one from the south was about hundred years.

“Akufo-Addo said all he wanted to do, was to bridge the divide between the north and the south. I am from the north, born and bred there, and I know that access to education is a very big deal. Akufo-Addo said the only way to bridge the gap is to declare free senior high school education in Ghana. And today the world is applauding him, because by that singular decision, what we see today is inclusive education. No one left behind.”

He continued, “For me, that has been the turning point in my young political career having worked with Akufo-Addo, and I am happy that I am seeing with my eyes, these policies rolled out by his government. And it is not just political talk. This is a man who means his words, and when he says it, it means he is convinced about a conviction, and he will stick by it.”

The Vice President, Dr Mahamudu Bawumia, who was Guest of Honour at the event, outlined a tall list of achievements chalked by the three year old Akufo-Addo government, and urged the diaspora to continue supporting the President's vision of a Ghana Beyond Aid.