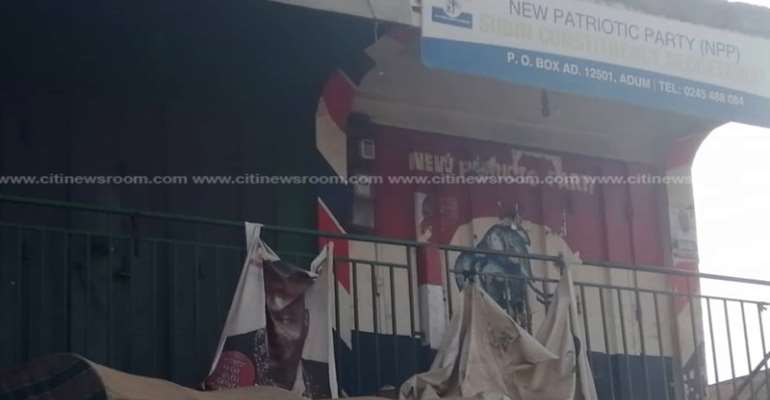 Armed police officers were deployed Tuesday morning to the Subin Constituency office of the New Patriotic Party (NPP) after some delegates threatened to lock up the facility.

The aggrieved NPP delegates accused the Member of Parliament of the area, Eugene Boakye Antwi, and some party executives of bias.

According to them, the MP and the executives are holding on to monies from the National office meant for delegates.

They claimed that some delegates, who they say are favourites of the MP were given their monies while others were discriminated against.

The delegates stormed the party’s office with extra padlocks and chains and threatened to close down the place if the monies which have been in arrears since 2017 were not released to them.

They tied red bands and held placards with inscriptions such as ‘Eugene must go’, ‘We want our money and others.

“We have worked hard to bring the party to power. When the President comes to the region and is on his rounds, we use our own money to also support and follow him. So when the party brings us something small for Christmas and the MP is sitting on it, no one will be happy with him…Up to date, no one has called us to tell us anything,” one woman complained to Citi News.

Police were however deployed to prevent the action and also disperse the crowd.