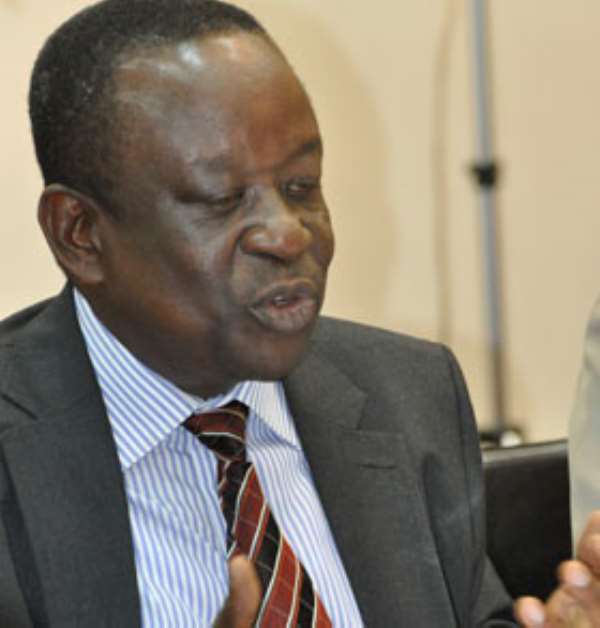 The golden pot is broken.
Its contents spilt all over.
And it appears everyone is up in arms to chastise the messenger that broke it.

The Akans say when an Elephant falls everyone gives him a beat-down, even the tiniest insect.

But are we infallible?
Are we Saints?
Louis Farrakhan Sr. leader of Nation of Islam (NOI) has an advice for all of us.

He says: "When you see men fall, don't laugh. Learn. Learn. Because you are on your way up. And the things that tempt them to fall, you and I, are not free from those temptations.

Know from the weakness that will cause us to stumble and fall. When you laugh at somebody else's fall, white or black, rich or poor, your enemy or friend, you are laughing and opening a way for your own demise-- when you do that. Because to laugh and not learn, to make mockery and not to understand is to make the same mistakes yourselves. Did you hear me?"

Of course, did we not hear this?
Flee from temptations. The French would say: 'Fuyez les tentations.' Oftentimes we hear and read this phrase, and oftentimes we remind ourselves of the consequences thereof or the impending dangers, yet we fall and keep on falling.

Why?
The answer lies in the womb of our actions and inactions. One thing seems to be certain though. It's what I've described as the Adamic diseases--- Money, Power and Sex. The three are lingering as man can't do away with any of them, it appears They absolutely show no sign of truncating their combined prowess and venomous power to out-do the vulnerable---man.

The Book of Genesis gives humanity a gist of what's to befall us. In the early chapters of the Holy Book, a story is told about the "Forbidden Fruit". Also known as the fruit of Life and Death.

Adam and Eve believed to be the first humans on Earth have done the unthinkable.

The two have eaten the fruit, God has instructed them not to eat (see Gen. Chpt. 2:16-17). It's understood to be the origin of sin.

God questions Adam
Adam instead of owning up his disobedience character, blames God and Eve, of course.

Undoubtedly,, man has fallen more than a million times since our Great-great Grandpa--- Adam fell on the 'sword' himself.

Since time immemorial these diseases have befallen, the wise, the rich, the powerful, the most famous, the strongest etc.

Remember biblical Samson, how he broke his Nazirite vow?

According to Midash Samson lost his strength because of his relationship with Delilah-- a foreign woman and not because his hair was cut.

So why do we keep falling?
Somehow, we haven't been able to appraise ourselves well with the lessons of the past. Yes, we know how Babylon fell. We know what caused Solomon to grieve painfully and we certainly know who orchestrated Samson's fall but none of it has transformed us to be a perfect man.

Suffice to say, we're perfectly not perfect and genuinely not genuine because we are humans. And this imperfection has time and again spawned us to the brink of precipice and on countless times to the abyss (when temptations avail themselves).

What is Sex
Wikipedia defines sex as an activity by humans solely for physical and emotional pleasure.

It can contribute to human bonding.
However, in my viewpoint, it can show its true colours. Sex can turn relationships sour, make and unmake one. Sex wields power. It's charming and it exudes immeasurable influence.

Sex has been mischaracterized sometimes because of the way it's been used.

Sex, at its very beginnings, may appear innocuous but it could be dangerous when it falls into its mischief element. Men have used it in both ways- positive and negative. And women have done likewise.

So who are we to blame?
What is Power
Power commands. But powerful men or women are not immune to temptations.

In fact, they seem to be more prone to temptations than many vulnerable.

Theirs are often, politically-motivated.
Political vendetta has become new norm.
And the recent amorous video that saturated our airwaves speaks to that. The story burst out like a monster child born with piercing horns.

The woes of Kan Dapaah
Who did trouble find in the alley?
Albert Kan Dapaah Minister in charge of National Security has become a victim amid calls for his resignation

But Member of Parliament of Assin Central Kennedy Agyapong says Mr. Dapaah should not be crucified over the amorous video with a lady identified as Chantelle kujavu.

“I am not clean, neither is any man, hence it will be unfair and hypocritical to castigate my fellow man for engaging in such an act. Let the clean cast the stone,” he made the remark on an Accra-based Oman FM on Monday.

Why has this phenomenon crept into our body-politik?

The quest for political power seems to be the driving force. You may beg to disagree with me. But it seems this kind of 'Gotcha Politics' didn't exist or wasn't so prevalent in our political dispensation roughly a decade ago.

I learned it happened some time ago, when the NDC was in power. At the time its arch rival----the NPP was in opposition. Some hold the view that it's payback time as the NPP now finds itself at the driver's seat. Really?

How long can we inflict this wound upon ourselves?
In my view it's some disgruntled individuals or politicians who have gained reputation to smear and undo their fellow politicians.

And I think it's about time we cautioned to them that this is not cool. It's more than dirty. It's uncouth and must not be entertained in our body-politik.

What would they gain one may ask?
Don't forget power commands.
And it gets things done by hook or crook means. Also remember the saying:

Absolute power corrupts absolutely.
Indeed, it gives credence to my assertion that: When the righteous falls demons dance...

It makes one wonder more: To what extent are we going to allow this evil practice tear our society and homes apart?

Money
Money like sex also has power and influence. But.what is it about money that makes it appear evil? What's about it, that makes men and women fall?

1 Timothy 6:10 says 'for the love of money is the root off all evil'. Note, the emphasis is on love of it and not money as legal tender. Remember bees like honey and women like money. It's believed the powerrful have oftentimes used money to win sex.. But that seems to be an erroneous impression. That is not always the case. One school of thought argues, some powerful or influential men have been seduced and harassed by women.

Caution
It is against this backdrop that Mr. Agyapong cautioned ladies not to allow themselves to be used as instruments for destruction as no amount of money is worth the risk.

On Sunday 12 January 2020 , a video of Mr. Kan Dapaah surfaced,and was seen 'sweet-talking' a woman purported to be his mistress.

It's understood the video call was recorded by the lady. Mischief was at work. The plot was thickening.

From the clip it appeared the 66-year-old National Security boss was somewhere in Europe, possibly on national assignment.

Well, I am not going to repeat any of that.. However, it can be deduced from the footage that Mr. Kan Dapaah who seemed oblivious of the recording threw all caution to the wind and little did he know that the meat put in his plate was laced with lead.