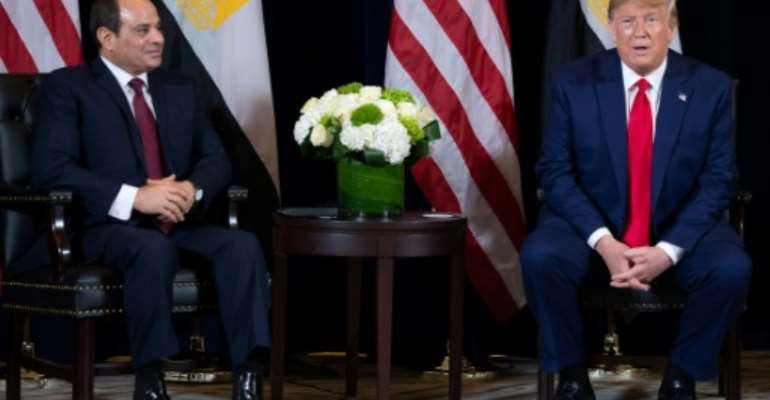 US President Donald Trump and Egyptian President Abdel Fattah el-Sisi meet on the sidelines of the United Nations General Assembly in September 2019. By SAUL LOEB (AFP/File)

An American citizen whose case was raised by top US leaders died Monday after more than six years in custody in Egypt, his representatives said, drawing criticism by Washington of its authoritarian ally.

Mustafa Kassem, a New York taxi driver originally from Egypt who was arrested on a home visit in 2013, had been on a liquid-only hunger strike since last fall and four days ago ceased drinking fluids.

The Egyptian interior ministry said he was transferred to the prison medic wing for treatment for his diabetes. "His condition deteriorated...and he died on January 13," it said in a statement.

The top US diplomat for the Middle East, David Schenker, described Kassem's death in custody as "needless, tragic and avoidable" and offered his "sincere condolences" to his family.

"I'll continue to raise our serious concerns about human rights and Americans detained in Egypt at every opportunity, as will the entire team at the Department of State," he said.

Schenker, however, did not specify any repercussions for Egypt, where President Abdel Fattah al-Sisi has closely aligned himself with US President Donald Trump in their opposition to Islamists.

Secretary of State Mike Pompeo had raised Kassem's case last month in a meeting in Washington with Egypt's foreign minister, and Vice President Mike Pence said he raised his case directly with Sisi on a 2018 visit to Cairo.

The 64-year-old father of two, who most recently ran an auto-parts business on Long Island, New York was detained as part of a major crackdown in 2013 on protests against Sisi, who had seized power in a coup.

Kassem denied he had joined the protests, saying that he had gone out to exchange money and had shown his US passport to police.

He was nonetheless sentenced in 2018 in a mass trial with hundreds of defendants to 15 years in prison on charges of trying to overthrow the government, according to his lawyers.

"No individualized evidence was ever presented against him," Pretrial Rights International and The Freedom Initiative, which represented him, said in a statement.

The group said Kassem was diabetic and that he was believed to have died of a heart failure, although they were awaiting an autopsy.