By Anna MALPAS with Imed LAMLOUM in Tripoli 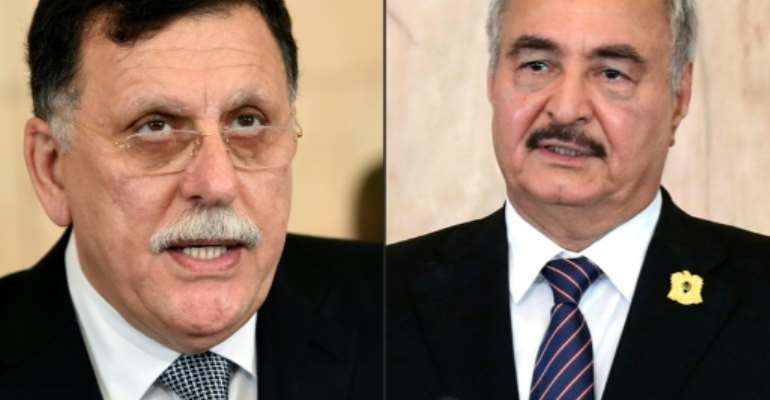 Haftar (R) and Sarraj (L) were to meet in Moscow for talks along with "representatives of other Libyan sides", the Russian foreign ministry said. By FETHI BELAID, HO (AFP/File)

Libya's eastern strongman General Khalifa Haftar delayed signing a ceasefire agreement at talks in Moscow, but Russia said it was hopeful the country's warring rivals would soon conclude the deal to end nine months of fighting.

Talks on the terms of a ceasefire between Haftar's forces and the UN-recognised government headed by Fayez al-Sarraj went on for seven hours on Monday without the two delegations actually meeting, though Moscow noted "certain progress".

Sarraj's Government of National Accord (GNA) in Tripoli has been under attack since last April from forces loyal to Haftar, who is based in the east of the oil-rich North African country with his loyalist politicians. 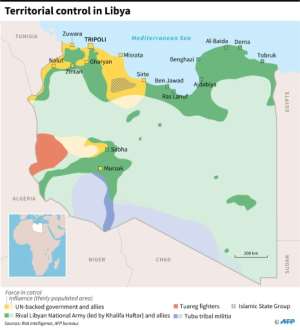 The two sides were expected to agree the terms of a ceasefire that took effect over the weekend, raising hopes of an end to the latest fighting to wrack Libya since a 2011 NATO-backed uprising killed longtime dictator Moamer Kadhafi.

Western powers are keen to stabilise Libya -- home to Africa's largest proven crude reserves -- because of concerns Islamist militants and migrant smugglers, already active, will take advantage of the chaos.

Russian Foreign Minister Sergei Lavrov said Sarraj and the head of High Council of State in Tripoli, Khaled al-Mechri, had signed the document.

But Haftar and his ally Aguila Saleh "have asked for a bit more time until morning" to study it, he said.

Turkey and Russia's foreign and defence ministers acted as mediators, but the rival delegations did not apparently come face-to-face.

"We have refused any meeting with Haftar," al-Mechri was quoted as saying by Libya al-Ahrar television channel.

The ceasefire initiative was launched by President Vladimir Putin and Turkish counterpart Recep Tayyip Erdogan, who jointly called for a truce in Istanbul last week. 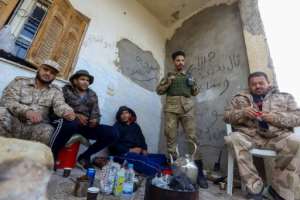 The UN-recognised Government of National Accord in Tripoli has been under attack since last April from forces loyal to strongman Khalifa Haftar. By Mahmud TURKIA (AFP/File)

A fragile ceasefire went into effect from midnight Sunday, but Erdogan on Monday reiterated the "urgent necessity" for a permanent agreement after meeting with Italy's prime minister.

German Chancellor Angela Merkel visited Putin on Saturday and he supported her drive to hold a peace conference sponsored by the United Nations. Berlin said Monday the summit was planned for later this month.

Diplomatic sources said discussions were also under way at the United Nations about establishing an observation mission in Libya to monitor the ceasefire, similar to an existing initiative in Yemen.

"For the ceasefire in Libya to hold, there should be an impartial monitoring and implementation mechanism as well as confidence-building measures," UN spokesman Stephane Dujarric told AFP.

The UN is already "recording and verifying reported ceasefire violations" through its political mission in Libya, which employs around 230 people, he added.

'Turn page on past'

Sarraj on Monday called on Libyans to "turn the page on the past, reject discord and to close ranks to move towards stability and peace".

Since the start of Haftar's offensive against Tripoli, more than 280 civilians and about 2,000 fighters have been killed and 146,000 Libyans have been displaced, according to the UN. 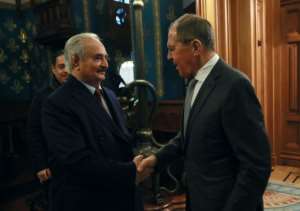 The GNA has also signed agreements with Ankara assigning Turkey rights over a vast area of the eastern Mediterranean, in a deal denounced by France, Greece, Egypt and Cyprus.

Russia has been accused of backing pro-Haftar forces, which are supported by the United Arab Emirates, Saudi Arabia and Egypt -- all regional rivals of Turkey. 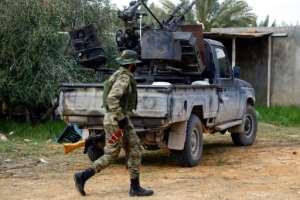 "Moscow wants to preserve its presence in Libya through Haftar, including its oil interests," he said.

Russia could rekindle trade in arms and wheat and relaunch a stalled railway construction project.

Europe and North Africa have also launched a diplomatic offensive to try to prevent Libya, with the increased involvement of international players in its conflict, from turning into what Berlin calls a "second Syria".

King Abdullah of Jordan on Monday warned that thousands of fighters have left Syria for Libya and "that is something we in the region but also our European friends will have to address in 2020".