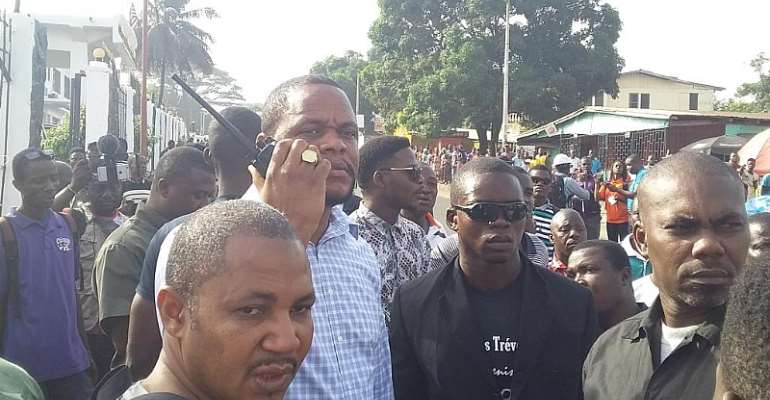 Immigration authorities are investigating circumstances as to how Henry Costa, the lead organiser of recent anti-government protests, obtained what the authorities have determined to be a forged travel document.

Costa arrived in Liberia on 19 December, using a laissez-passer document, which he said he obtained from the foreign affairs ministry. But immigration officials in Monrovia say the document was forged.

On Saturday 11 January, Costa presented himself at the headquarters of the Liberian Immigration Service (LIS) unaccompanied by his lawyer Findley Kangar.

Speaking exclusively to RFI, Abraham Dolley, Communications at the Immigration Service chief, said preliminary findings show that Costa obtained the laissez-passer with the assistance of Sylvester Tevez Nah, a longtime friend of Costa, who is being sought out to aid with the investigation.

“There are some fraudulent acts that occurred during the procurement of the laissez-passer,” said Dolley.

When contacted by RFI, Nah said Costa wired money to him from Ghana to help him get the document. Nah said he went to the Ministry of Foreign Aaffairs and procured the document through the required legal means.

'Invalid' document
Given that it can be difficult to obtain documents from embassies abroad, it is common, and legal, in Liberia to ask a relative or friend to help with official documents if the person is not in the capital, Monrovia.

“The major features that are embedded in the document aren't valid – the signature and even the official seal on his photograph, are not genuine from the Ministry of Foreign Affairs,” stressed the immigration spokesman.

According to Dolley, the act violates Liberia's immigration laws. He says the appropriate legal action would be taken against Costa by the head of immigration, in line with the Ministry of Justice if the investigation established it was a fraudulent act.

In Liberia, a temporary laissez-passer travel document is usually issued to citizens of countries in the Economic Community of West African States (ECOWAS) regional body, commuting within West Africa.

Those authorised to use a laissez-passer are those who do not have a passport, or their passport has expired. Others, who have their passport deposited at an embassy and do not have access to it, can also obtain the document. It is only used as a temporary measure, with most not issued for more than 30 days.

Liberia's Ministry of Foreign Affairs indicates that a laissez-passer can be issued on a) medical grounds, b) serious emergency, and c) for humanitarian reasons.

RFI obtained a copy of the questionnaire given to Costa at the Ministry of Immigration. The radio host said that he needed the laissez-passer because of a “serious emergency”.

The person who leaked the questionnaire, an immigration officer, has been suspended, pending a ministry investigation, said Dolley.

Meanwhile, Costa, the man at the centre of the controversy, is accusing immigration officials of forging the document in order to incriminate him.

Costa has celebrity status in Liberia, as a talk show host, political commentator, and also the chairman of the Council of Patriots, the group that organised the anti-government protest in Monrovia on 6 January.

At a news conference on Sunday, he accused the government of plotting against him, due to his public stance against corruption, inequality and inflation.

Costa admitted he initially travelled from the United States, where he is studying, using his official Liberian passport. Once he got to Ghana, he decided to use a laissez-passer instead of his passport.

“I used that laissez-passer to travel from Accra to Liberia because I wanted to obtain an Italian visa so that I would be able to visit my son who lives in Italy,” he indicated.

He said he wondered why immigration officials allowed him to enter Liberia if they claimed the laissez-passer was forged.

Costa has announced series of protests against the legislature amid rumours that the government is about to sell some offshore oil blocks in the country.

He accused lawmakers of complicity in bad governance and said they would face a mass public protest sooner rather than later.

Such a protest, he said, is intended to make the members of the legislature put their house in order and stop aiding and abetting corruption.

Recently, the Liberian government through the Liberia Petroleum Regulatory Authority (LPRA) announced the sale of several oil blocks in 2020.

The government statement at the time reflected the decision following the unsuccessful ratification of negotiated petroleum sharing contracts in 2014, something Costa has vowed to push against.

The investigation continues into how he obtained what the authorities here described as a forged document that he used to travel from Ghana to Monrovia.