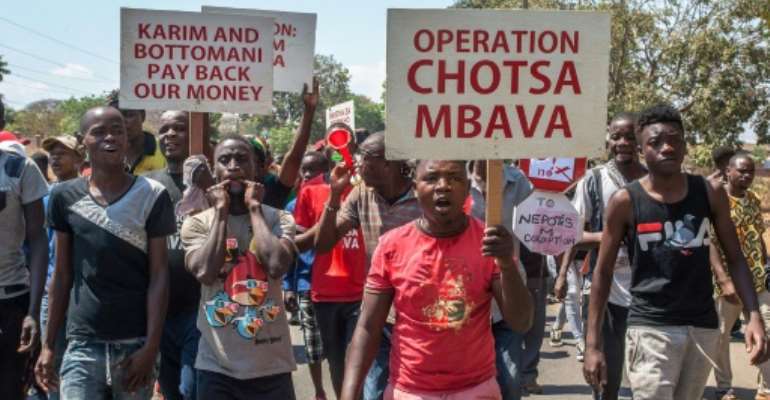 The official results of the election sparked angry protests. By Amos Gumulira (AFP)

The opposition Malawi Congress Party (MCP) and the United Transformation Movement (UTM) have said the May 21 poll last year was marred by fraud.

Opposition leaders allege the election's tally sheets were tampered with. In August, they petitioned the top court to annul the results.

It is the first time presidential election results in Malawi have been challenged in court since the country gained independence from Britain in 1964.

The Anti-Corruption Bureau (ACB) on Monday said it had received a complaint from Chief Justice Andrew Nyirenda alleging bribes had been offered to the five judges presiding over the case.

"I can confirm that we received the complaint from the chief justice," ACB head Reyneck Matemba told AFP.

He added that he could not release "names of the suspects" for the time being.

Judiciary spokeswoman Agnes Patemba confirmed the case would be handled by the ACB.

Mutharika has dismissed doubts on the official results, which show he won 38.57 percent of the vote to Chakwera's 35.41 percent.

Malawi's leading legal association condemned the alleged bribery and called on the ACB to "strictly execute its core duty".

It also urged the public "to be patient" and "resist any temptation for mob justice".

Sporadic demonstrations have broken out across the southern African country since the election, with protesters demanding the ouster of the electoral commission's head over her handling of the vote.

Many rallies have faced a crackdown by security forces. Two policemen were killed in separate incidents after getting embroiled with the crowds.

The next round of demonstrations is expected to take place in three cities on Thursday.

"There is a clear intention by some of the parties to the case to compromise the judiciary," said Malawian law professor Danwood Chirwa.

A ruling is expected by the end of January.