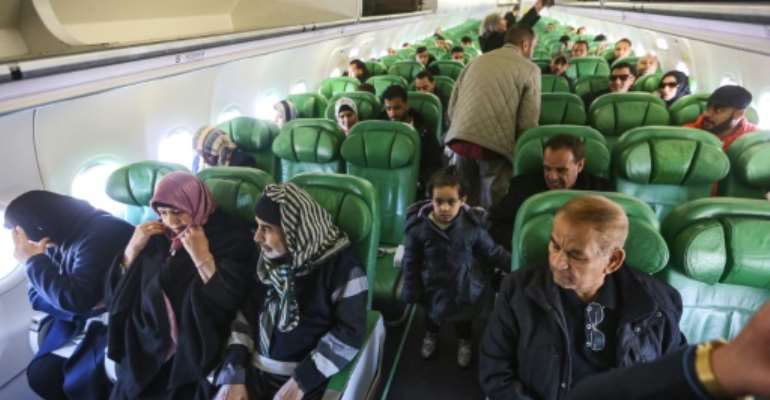 Passengers board and sit inside an aircraft at Mitiga airport, east of the Libyan capital Tripoli. By Mahmud TURKIA (AFP)

The Libyan capital's airport, closed since last week, reopened Monday following a truce that has come into force after nine months of fighting for control of Tripoli.

Libyan Airlines, the national carrier, said flights resumed to and from Mitiga airport, and other private airlines also restored services.

Mitiga has been the target of several air raids and rocket strikes since military strongman Khalifa Haftar's forces launched an offensive last April to seize the capital from the Tripoli-based Government of National Accord.

It has since closed intermittently, including after renewed attacks last week.

The warring parties are expected to sign an accord in Moscow on the terms of a truce that took effect at midnight Sunday, raising hopes of an end to fighting that has wracked Libya since a 2011 uprising that killed longtime dictator Moamer Kadhafi.

Don't succumb to pressure to support LGBTQI agenda – GMM to ...
18 minutes ago