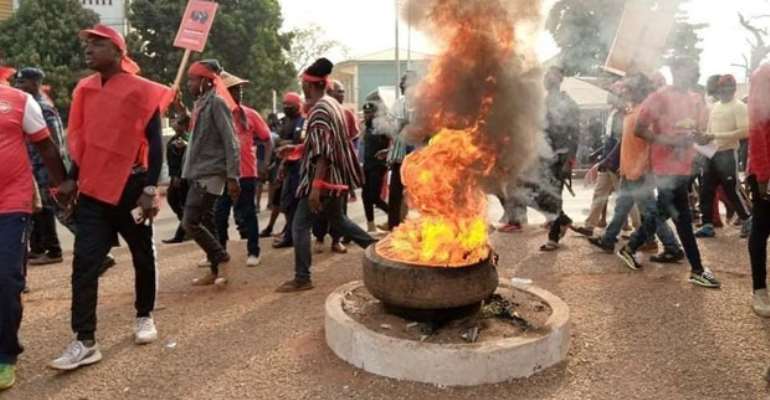 A scene from the demonstration on Saturday

Some sympathisers of the opposition National Democratic Congress (NDC) burnt tyres to register their displeasure over the move by the Electoral Commission (EC) to compile a new voters' register for the upcoming general elections, this year.

They marched through the Central Business District of Tamale chanting 'war songs' against the compilation of a new voters' register by the EC.

The NDC supporters burnt tyres at Choggu hilltop, water works area, sharp corner area and other locations throughout their demonstration.

The demonstration dubbed: “TIKUSAHI Demonstration” was organized by the Inter-Party Resistance against a New Voters' Register (IPRNA) in Tamale in the Northern Region.

Addressing party supporters at the Jubilee Park in Tamale, the Member of Parliament for Tamale South Constituency, Haruna Iddrisu, said the party would resist any attempt by the EC to compile the new voters' register.

According to him, the EC should use same register that was used to elect President Akufo-Addo in the 2016 general elections. He argued that the current voters' register is credible, adding that the EC would not have used it for the referendum to create new regions and also for the election of assembly members.

The EC has indicated plans to acquire a new Biometric Voter Management Solution to enable the commission to compile a new voters' register ahead of the 2020 General Elections.

I've never seen a male goat or cow running after another mal...
25 minutes ago