Do Not Look Where You Fell But Where You Slipped: Message To Critics Of Akufo-Addo’s Gov’t 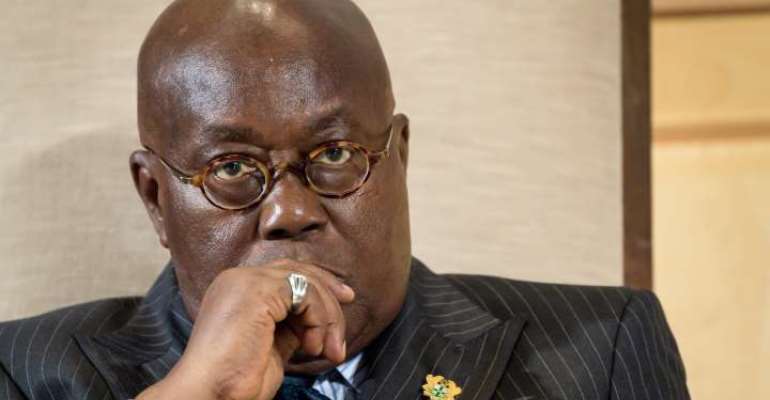 On the 7th of January, 2016, Ghana yet saw the birth of a new government. The country again demonstrated to the rest of the world another democratic feat, with the swearing-in of the fifth president of the Fourth Republic. The day for handling over power and swearing was a glorious day that cannot be forgotten in the history of Ghana and Africa.

Truly, death cannot conquer the memory of Ghanaians as for this government.The three years reign of Akufo Addo's government can be subjected to criticism. Criticism of the NPP government should be constructively rather than destructively.

The manner at which we criticise politicians destructively does not help promote democracy and cannot solve our political problems. Our criticism has a deeper source in tribalism, religion, age and culture. This criticism has brought an epidemic of poverty, loneliness and death for the Ghanaian child.

Is not debatable that the NPP government had finished and sealed the work of a 'Ghana Beyond Aid' agenda. There is more work to be done. Ghanaians still face problems concerning utility tariff, unemployment, salary increment,poor infrastructure, corruption, nepotism etc. There are Ups and Downs the government continues to face .

Notable among the achievement of Akufo Addo's government includes Free SHS policy, planting for food and jobs, Nation Builders Corps etc. This had brought relief to the majority of Ghanaians.

The level of corruption under Akufo-Addo's government cannot be described as the worst ever in the history of Ghana. The appointment of a Special Prosecutor had really been undertaken to investigation all claims brought before the commission. This includes the Public Procurement Authority, PPA scandal.

The campaign trail, President Akufo-Addo made the people of Ghana aware of how bad the economy had been, how deplorable the rail system is. The poor living conditions within the Zongo communities were also raised. He told Ghanaians the need to reorganize the regions to ensure a fair, equitable and balanced distribution of national resources among other crucial national needs.

To tackle this herculean task, the new government led by President Nana Addo Dankwa Akufo-Addo nominated people for almost all key ministerial positions in his government. The swift manner under which he released the names of these nominees signifies his preparedness to take over the reins of the governance of the country.

Taking into consideration the herculean task ahead of him and the limited time of four years, he has to make an impact and qualify for reelection in 2020 when he could consolidate his gains.

The clear message from these new ministries created by the President is that we cannot continue to do the same thing to achieve new results. We must as a people, accept change and attempt new things, explore much more opportunities available to achieve new and satisfying results.

Decentralization was key to development by the NPP government. The government created more districts and Municipalities to bring government closer to the doorstep of people and that is the way Ghanaians would get better governance.

The President’s ambition to turn the nation round is obviously clear and the step for the start is right.

All the key areas which the President has highlighted as crucial and therefore ensuring pragmatic approach to their recovery such as aviation, railways, regional reorganization and business development among others are honestly genuine needs of the people of Ghana.

A country like Ghana with collapsed railway system and also without a national carrier but rather entertaining over 42 other national airlines into our airspace indeed warrants such an approach from such a visionary leader.

The question about the cost implications and the funding of the new ministries should be looked at as an investment. The longer Ghanaians sustain such investments the more citizens will enjoy the dividends.

Is time politicians, critics learn from their mistakes and ponder on the proverbial saying'Do not look where you fall but where you slipped. The path to see more developments, achievements is to probe our source of the fall, thus the thought that distracted us to fix the problems.