Haruna Iddrisu Is Asking the Wrong Person the Wrong Questions 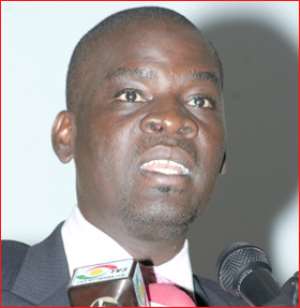 As the dynastic General-Secretary of his own party, the main opposition National Democratic Congress (NDC), Mr. Johnson Asiedu-Nketia, would have told Mr. Haruna Iddrisu, the NDC’s Tamale-South Member of Parliament and the Parliamentary Minority Leader, that is, if the latter had demanded to know, it was actually the technical and/or technological sophistication and the vigilance of New Patriotic Party’s polling agents, observers and assigns that guaranteed the landslide victory that then-Candidates Addo Dankwa Akufo-Addo and Mahamudu Bawumia achieved in the 2016 Presidential Election.

You see, veteran NDC political scumbags and scam-artists like Mr. Asiedu-Nketia have always known that his own party’s appointees on the administrative staff of the Electoral Commission (EC), beginning with the longest-reigning EC’s Chairperson, Dr. Kwadwo Afari-Gyan, had always bloated the National Voters’ Register (NVR) in favor of Dr. Afari-Gyan’s paymasters, beginning with NDC’s founder and former President Jerry John Rawlings. Dr. Afari-Gyan personally admitted to the Atuguba panel in the 2012 Presidential-Election Petition that the NVR was bloated with the names of ineligible voters, largely underage minors, although he also scandalously claimed that he could neither define what “overvoting” and “under-voting” meant.

It was, in fact, for the preceding reason that in the wake of the 2012 Presidential Election, which Dr. Afari-Gyan had called in favor of then-Interim President John Dramani Mahama, against vehement protestations and widespread calls for a recount, Mr. Asiedu-Nketia personally admitted in a radio interview that the incumbent presidential candidate of his own then-ruling National Democratic Congress, Mr. Dramani Mahama, had not really won the 2012 Presidential Election, but that Dr. Afari-Gyan had deliberately declared Mr. Mahama the winner because the polling agents, observers and assigns who were supposed to be looking out for then-Candidate Addo Dankwa Akufo-Addo had not been vigilant enough.

I have already written extensively on this subject and there has not been a single instance in which Mr. Asiedu-Nketia has either been heard or quoted to be publicly denying this fact. It is also interesting and significant to observe that nearly all the elections that Mr. Iddrisu is now claiming to have authenticated the credibility of the current National Voters’ Register were not contested along political party lines. The usage of the NVR in the region-creation referenda was not a partisan-based or oriented election; but, of course, we all know and are fully aware of the fact that Election 2020 will be contested along partisan lines (See “Publish the Names of Togolese in Voters’ Register – Haruna Iddrisu Challenges Bawumia” News Desk – Modernghana.com 1/11/20).

We must also note here that in the case of the Atuguba-presided panel of the Supreme Court Judges that adjudicated the 2012 Presidential-Election Petition, virtually all the judges were in unreserved agreement that, indeed, the NVR had been significantly bloated, although the Afari-Gyan electoral judgment call favoring then-Interim President John Dramani Mahama was allowed to stand, which was problematic, and which also prompted then-Candidate Akufo-Addo to poignantly respond that although he respected the decision of the Atuguba panel, he, nevertheless, vehemently disagreed with the decision of the Wood Supreme Court of Ghana. Creating a new NVR, it stands to reason, will significantly prevent the recurrence of such at once curious and paradoxical decision by the Supreme Court of Ghana.

Then also must be quickly pointed out that the recent District Assembly Elections were also conducted along nonpartisan lines and cannot be authentically or credibly cited as an instance that proves that those who are now demanding the creation of a new NVR may be guilty of double standards or dishonesty. The rude defiance of the strictly laid down voter registration rules by the Wood-presided Supreme Court of Ghana that was flatly rejected by Mrs. Charlotte Kesson-Smith Osei, the immediate successor of Dr. Afari-Gyan, on the rather dubious and imperious grounds that such guidelines were too elitist, did not enhance the case of those presently staunchly backing the purported authenticity of the current NVR.

Indeed, Mr. Iddrisu, during the Tikusayi protest demonstration against the creation of the proposed new NVR just this past Saturday, January 11, 2020, well appeared to contradict himself, when the Tamale-South’s NDC-MP stated that he would not be averse to the revision of the current NVR as part of the technological improvements of our electoral process, such as the proposed addition of facial-recognition features to the Biometric Voting Machines (BVMs). As already noted in a previous column, much of the distortions of the NVR at the parliamentary level largely occurred in the Volta Region, where even without such NVR bloating, it was highly unlikely for the New Patriotic Party to have won more than just a couple of seats. But, of course, in a presidential election, 76,000-plus votes could make a heck of a seismic difference in a closely contested election.

Finally, we must also highlight the fact that it was an identifiable group of some disgruntled operatives of the Youth Wing of the NDC, largely from the Ketu-South Constituency, of the Volta Region, who publicly confessed to some leaders of the extant main opposition New Patriotic Party, of having been prevailed upon by some local NDC party executives to cross the border into Togo and register Togolese nationals as bona fide members of the NDC, with promises of such gifts and incentives as enrollment into Ghana’s free National Health Insurance Scheme (NHIS) and gifts of bicycles and motorbikes, among other baubles. These details of the perennial shenanigans of some of the local operatives of the National Democratic Congress in the Volta Region, and elsewhere around the country, have been extensively published by the media, so there is absolutely no need to rehash the same here.