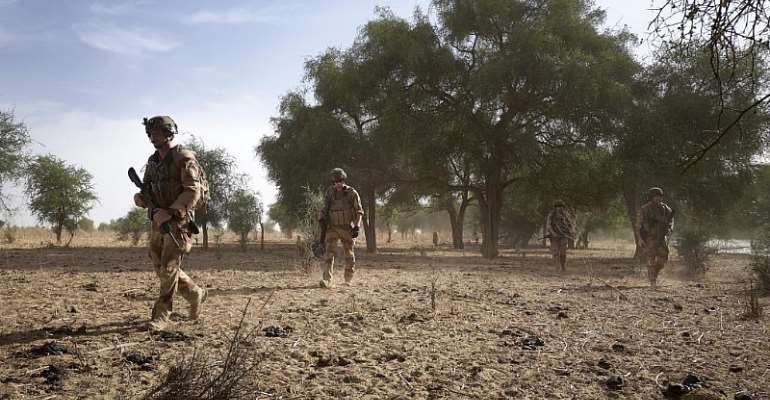 French President Emmanuel Macron will host heads of state from west Africa Monday in the southern city of Pau to map out a new strategy to fight insurgent violence. It comes amid a spate of deadly attacks and increasing hostility towards the presence of French troops.

After initially being postponed, it is in the garrison town of Pau at the foot of the Pyrenees in southwestern France, where Monday's summit will now take place.

The choice is not insignificant. The city was home to seven of the thirteen French troops who lost their lives in a helicopter collision while hunting jihadists in northern Mali last November.

An inside source told RFI that the accident had strengthened France's resolve to review the efficacy and purpose of its combat mission in the Sahel.

"This summit was called after the emotion caused by the accidental death of 13 of our French troops," comments Emmanuel Dupuy, president of the Institute of European Perspective & Security Studies in Paris.

More than forty French soldiers have been killed since 2013 when France first engaged troops in Mali through its Serval operation and succeeded in driving out jihadist militants from towns they were occupying in the north.

Limited gains
A deadly attack on a Niger military base last month, killing 71 soldiers, was a stark reminder of the terrorist threat in the Sahel, which forced the French government to hold off from holding the Pau summit, initially planned for 16 December, until now.

"There is interrogation about whether or not the presence of 4,500 French troops in five countries: Mauritania, Mali, Niger, Burkina Faso and Chad is efficient to fight against the insurgency," Dupuy told RFI, which has become bolder and more complex in recent months.

On Sunday, the death toll from another attack by rebel fighters this week on a Niger army base in the western town of Chinagodrar climbed from 25 to 89.

Failure to quell the violence has fueled rising anti-French sentiment against the former colonial power.

On Friday, hundreds of people demonstrated in Mali against the presence of foreign troops in their country, brandishing slogans reading "Down with France, Barkhane must leave," referring to the 4,500-man French force in five Sahel countries, according to the AFP.

The people of Bamako but also Ouagadougo in neighbouring Burkina Faso, hit too by jihadist attacks, are questioning the efficiency of France's military presence, continues Dupuy.

Searching for commitment
"With 4,500 soldiers, more than 500 armed vehicles, 20 or more helicopters, we should have wiped the insurgency out by now. But a military solution alone is not the answer," he said.

French President Emmanuel Macron has thus invited his counterparts from the five west African countries to adopt a new strategy in their increasingly shaky counter-terrorism alliance.

Macron's invitation initially angered some Sahel leaders, who perceived it as an order.

The French president said last month he could not "ask his troops to fight against jihadi violence in the Sahel and at the same time put up with critical statements from the public about their presence."

"We must obtain from west African leaders a clear position as to what they want and don't want," she told AFP.

While France has a legal mandate from the five Sahel countries justifying its presence in the region, a semi-arid belt beneath the Sahara, it now wants these countries' populations to recognise its legitimacy as well.

Call for solidarity
This recognition is needed to secure the support of European countries, which so far have been reluctant to engage troops on the battlefield, and will be less inclined to do so given the public antipathy towards France, according to analysts.

"Joseph Borrell, head of the EU External Action Service was the first to say that France should not be the only European partner to fight against terrorist organisations in the Sahel," Dupuy commented, although he remains sceptical that other countries will step up.

"European Union countries do not have the same vision," he says.

Germany recently turned down an offer from France to participate in Paris' new Takouba task force, a special operations unit that would be engaged in real fighting, replying that it already had over 1,000 troops in the 13,000-man UN peacekeeping force, MINUSMA.

Lack of coordination
"Germany, and the United Kingdom," which is due to send over 100 troops to the Sahel this year, "have said they will fight against terrorism but not with the French forces," explains Dupuy.

The G5 leaders also have some 5,000 troops fighting the insurgency, but lack funding, training and equipment.

Part of the objective of the Pau summit will also be to coordinate all of these military missions into a common strategy for west Africa.

"There are more or less 30,000 troops on the ground, costing something like 4 to 5 million euros per day," offers Dupuy. Local populations, he says, are waiting for them to deliver.