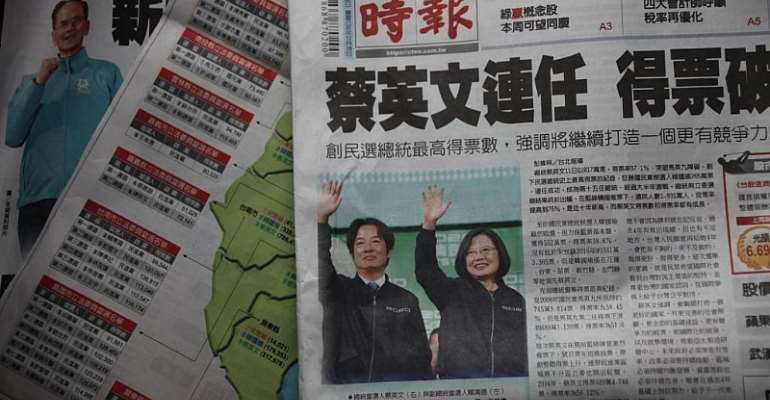 Beijing wared Taipei against any ideas about independence while the Kuomintang (KMT) licked its wounds after the DPP won more votes than ever before in Taiwan's presidential elections.

Hong Kong may have been crucial for Taiwan president Tsai Ing-wen's victory, but KMT candidate Han Kuo-yu may well have dug his own grave before the protests even started

“We have one consistent line when it comes to Taiwan policy. We support 'peaceful reunification' and 'one country, two systems.' We are strictly opposed to any separatist plot aiming at 'Taiwanese independence.'”

The harsh words were plastered across the front page of Sunday's People's Daily, the official newspaper of China's Communist Party (CCP), without mentioning the impressive, 57,1 percent victory of Tsai Ing-wen over the pro-Beijig Han Kuo-yu, who won just over 38 percent.

However, she did not beat the 58,45 percent score gained by her predecessor Ma Ying-chiu (also DPP), who won the elections in 2006 with 7,65 million votes.

The turnout of Saturday's vote was a solid 75 percent of Taiwan's more than 19 million voters.

Parliamentary elections which were held in tandem with the presidentials also turned out  well for the DPP as they won 61 seats, still an absolute majority in the 113 seat Legislative Yuan, but here they lost 7 seats compared to 2016. The KMT, which had 35 seats, gained three seats, climbing to 38.

Overall, Saturday's elections annulled the significance of the 2018 local election results when Han Kuo-yu, which managed to wipe away most of DPP control on the island, winning 16 out of 22 municipalities and counties, leaving the DPP with only six, where they controlled 13 before.

“Han wave” broken
This “Han wave” that offered solid prospects of a presidential victory for Han Kuo-yu, was driven by a barrage of fantastic economic promises, where he said that he would bring a Disneyland theme park to Taiwan and integrate second city (of which he is mayor) Kaohsiong in the world's F1 racing circuit to help boost the economy.

He rapidly captivated a growing public that was not deterred by his populist style and sometimes racist and misogenic remarks.

But according to most opinion polls, Han's popularity entered a steep decline in April last year, while Tsai's popularity rose.

Most analysts agree that the situation in Hong Kong, and its government's clumsy handling of a controversial extradition bill that lead to increasingly violent protests, was the main reason that Tsai's popularity grew, as she took the Hong Kong example as a warning against what all-too-close ties with Beijing could mean for Taiwan.

Private visit
But before protests in Hong Kong had erupted on a city wide scale, Han Kuo-yu had already undermined all chances of ever becoming Taiwan's president.

On March 23, in an unprecedented move, he decided to deviate from an official trip to Hong Kong and Macao and, without informing his delegation, paid a private visit to the Liaison Office of the Central People's Government in the Hong Kong Special Administrative Region (LOCPG), Beijing's de-facto “embassy” in Hong Kong.

Han met with then LOCPG director Wang Zhimin (who was replaced by Beijing in early January.)

The content of this conversation, which took place around the time that Taiwan was gearing up for the Primaries, was never disclosed, but led to increasingly harsh criticism of Han, accusing him of selling out to China, and raising fears that Beijing may exploit the visit to propagate its “one country, two systems” policy. His popularity started to decline immediately after the incident.

Anti-Beijing sentiments
Weeks later, unrelated, protests in Hong Kong against the governments' introduction of an extradition bill exploded and reached a boiling point in June.

Tsai Ing-wen deftly used Hong Kong's anti-Beijing sentiments for her own political campaign with the slogan “today Hong Kong, tomorrow Taiwan,” answering to concerns of Taiwanese people, 90 percent of whom, according to a poll held by Taipei's Mainland Affairs Council, increasingly disapprove of Beijing's “one country, two systems” initiative.

But thanks to her rival Han Kuo-yu's impromptu overtures to mainland authorities in March, she may have won her victory without even using the Hong Kong protests as a political tool to gain support.

Avoid greed, dishonesty and hypocrisy in galamsey fight – As...
50 minutes ago