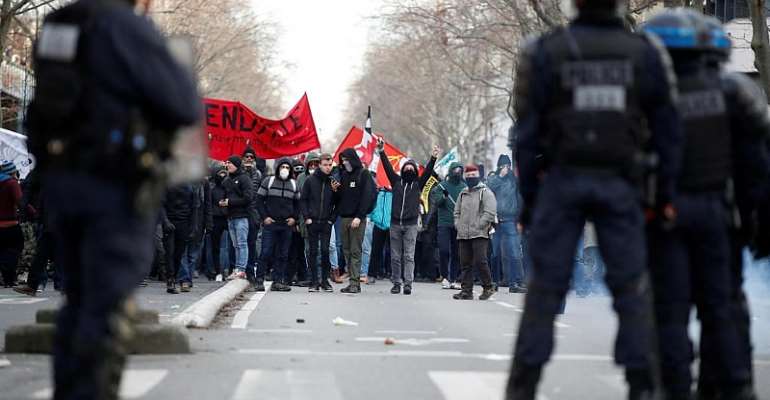 The French union leading an historic transport strike is "more determined than ever" to stop pension reform despite a new government overture, it said Saturday.

France's government Saturday proposed a compromise to end a crippling transport strike against pension reform, with an offer to withdraw a key proposal on raising the retirement age, but trade unions gave the announcement a mixed welcome.

The overture from Prime Minister Edouard Philippe came as protesters smashed storefronts in clashes with police in Paris, with the transport shutdown against the pension overhaul dragging into its sixth week.

"I am willing to withdraw from the bill the short-term measure I had proposed," said Philippe, offering to scrap the most contested initiative that would in effect have raised the retirement age by two years to 64.

French President Emmanuel Macron hailed the plan as "a constructive and responsible compromise."

The hardline CGT union, which has taken a leading role in the strike action, swiftly poured cold water on the government's offer, calling the compromise proposal "a smokescreen to get some unions to sign on" to the overall reform.

The more moderate CFDT and UNSA unions welcomed Philippe's offer, meaning the government may succeed in splitting the unions on the reforms.

An inter-union body which includes the CGT and fellow hardline union the FO among others called for a new days of protests next week.

'We are still here!'
The government's move came a day after they met with unions in a bid to end the labour action that has frustrated Paris commuters, ruined December holiday travel plans, and carved away at business bottom lines.

Demonstrators in the capital, some masked and hooded, broke shop windows along their protest route Saturday, set fires and threw projectiles at police in riot gear, who responded with tear gas.

Several stores were ransacked as marchers brandished union flags and chanted defiantly: "We are still here!" and "Macron resign".

The interior ministry said 149,000 people had turned out throughout France.

The CGT put the overall figure at half a million, saying the 150,000 marched in Paris alone.

In one of Macron's signature reforms, the government seeks to fuse 42 existing pension schemes into a single, points-based system it says will be fairer and more transparent but which unions fear will see millions work longer for a smaller retirement payout.