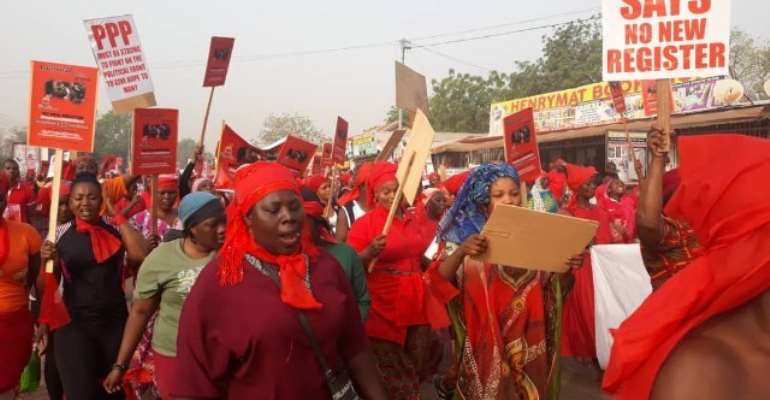 A demonstration in Tamale on Saturday saw hundreds of people coming out to support the resistance.

Concerned Voters Movement (CVM), a pro-NPP group has jumped to the defence of the Electoral Commission over its decision to compile a new Voters Register ahead of the December 2020 General Elections

According to the CVM, those kicking against the Electoral Commission’s decision do not understand the critical electoral reforms needed.

The Concerned Voters Movement say the arguments, which include timelines, cost and rigging – are all “baseless and misleading.”

The group, in a statement, accused the biggest opposition party, National Democratic Congress and the Inter-Party Resistance against the New Voters Register (IPRAN) of intellectual dishonesty.

They say the issue of time is a no problem at all because in 2012, the EC compiled a voters’ register and it was an election year; which is the same scenario this year.

“Under all these circumstances the NPP as the largest opposition Party then never objected to the compilation of the 2012 New Biometric Voters Register and the creation of additional 45 Constituencies all within the period of the election year 2012.”

“Therefore the noise by the NDC, CDD, IPRAN, and others over timeliness are completely senseless,” the statement said.

On the issue of cost, Razak Kojo Opoku, leader of the CVM, who signed the statement said the new technology which will be deployed for the new register will help the EC to “avoid the payment of $400million as the annual maintenance fee for the EC Data Center.”

The Concerned Voters Movement fully supports the election governing body in its quest as “as enshrined in Article 45 of the 1992 Constitution,” the statement noted.

Meanwhile, the Inter-Party Resistance against the New Voters Register has been organising talks and protests against the EC’s decision.

A demonstration in Tamale on Saturday saw hundreds of people coming out to support the resistance.

The EC, has meanwhile been justifying its decision to compile a new register.

The Commission said at a press conference on December 31, 2019, that the move to procure the biometric system is informed by advice from its IT personnel and external IT consultants.

According to the EC, assessment of the system by the two teams has revealed that it would be prudent to acquire a new system rather than refurbish the current one.

The Commission said it would make more economic and operational sense to acquire the new system than to keep the current system and refurbish them at a high cost of frequent replacement of failing parts and renewal of warranties.

I've never seen a male goat or cow running after another mal...
37 minutes ago