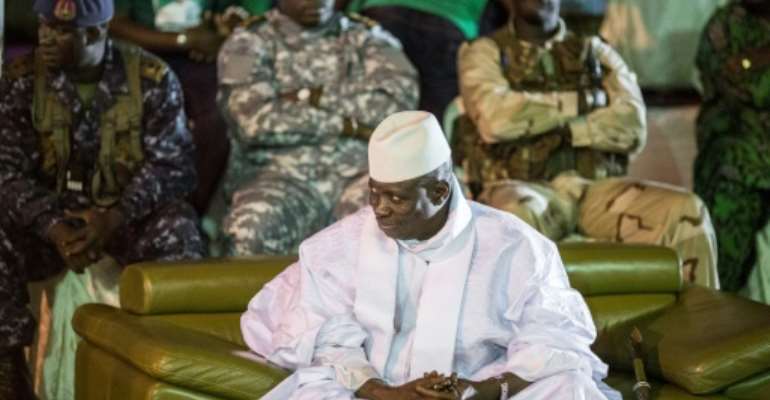 Former Gambian dictator Yahya Jammeh (pictured November 2016) lent his support to a demonstration planned for January 2020 by his backers in a leaked recording. By MARCO LONGARI (AFP/File)

Former Gambian dictator Yahya Jammeh, forced into exile in 2017, has been heard in a leaked recording demanding that his right to return be respected by the authorities.

Jammeh has hardly been heard from since fleeing to Equatorial Guinea.

His comments were made public in a recording of a conversation between him and an official of his party broadcast on social media.

In it, the president lent his support to a demonstration planned by his backers on January 16.

In a statement published at the time of his exile, the African Union, the Economic Community of West African States (ECOWAS) and the United Nations committed to working with the Gambian government to ensure Jammeh's security and rights, in particular his right to return.

The former autocrat ruled the tiny West African state for 22 years before he fled in January 2017 after losing a presidential election in 2016 to Adama Barrow, a relative unknown.

Since January 2019, some 190 witnesses have appeared before a Truth, Reconciliation and Reparations Commission (TRRC) set up to investigate abuses under his rule.

The first year of hearings ended in early December, capping months of testimony about torture, murder, rape and witch hunts.

Despite the grisly testimony, the former president, still retains some support in the country of around two million.

There have been numerous calls for Jammeh to be returned to The Gambia for prosecution, while others are seeking his active return to politics.

Thousands of supporters of Jammeh's Alliance for Patriotic Reorientation and Construction (APRC) party thronged the capital Banjul on November 2019 demanding his return from exile.