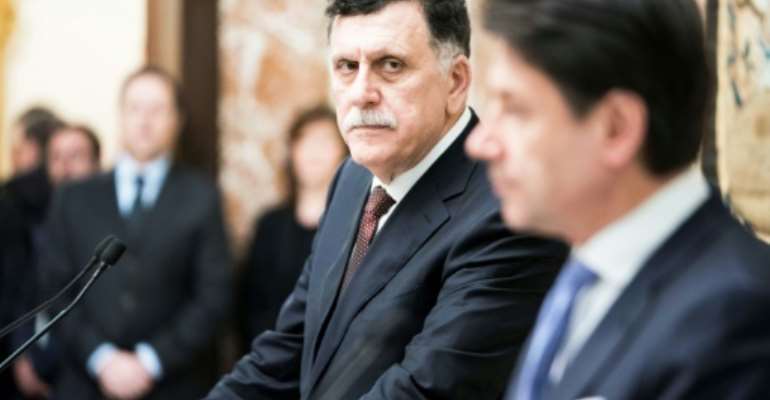 This handed out on January 11, 2020 by the Palazzo Chigi Press Office shows President of Libya's UN-recognised Government of National Accord (GNA), Fayez al-Sarraj, who said he "welcomed" a joint Russian-Turkish initiative for a truce. By Handout (Palazzo Chigi press office/AFP)

The head of the UN-recognised government in Libya said Saturday a ceasefire in the conflict-torn country would be conditional on a climbdown by Libyan strongman General Khalifa Haftar.

Government of National Accord (GNA) chief Fayez al-Sarraj said he "welcomed" a joint Russian-Turkish initiative for a truce.

"The condition is the withdrawal on the part of the attacker, who does not seem willing because he has another modus operandi," he said in reference to Haftar, following talks with Italy's Prime Minister Giuseppe Conte in Rome.

Europe and North Africa have launched a diplomatic offensive to try to prevent Libya, with the increased involvement of international players in its conflict, from turning into a "second Syria".

Haftar's forces in April launched an offensive against the capital, seat of the GNA -- a military campaign that a UN panel of experts says has "unleashed new transfers of military equipment" to Libya.

Turkish President Recep Tayyip Erdogan and his Russian counterpart Vladimir Putin called for a ceasefire on Wednesday in Istanbul, and Turkey on Saturday asked Russia to convince Haftar to respect it.

Haftar has claimed that a revival of the political process and the country's stability could only be assured by the "eradication of terrorist groups" and the dissolution of militia controlling Tripoli.

Conte said Italy would make an "increased effort" to have a greater EU involvement in efforts to de-escalate the situation in the North African country, wracked by chaos since its 2011 revolt that toppled longtime leader Moamer Kadhafi. 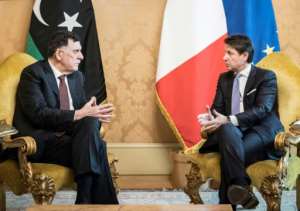 This photo handed out on January 11, 2020 by the Palazzo Chigi Press Office shows Italian Prime Minister Giuseppe Conte (R), who said Italy would make an "increased effort" to have a greater EU involvement in attempts at de-escalation in Libya. By Handout (Palazzo Chigi press office/AFP)

"We are convinced that this will offer the best guarantees against leaving the future of the Libyan people to the will of single individuals," he said.

The EU is keen to stop the conflict spiralling out of control, fearing that terror groups such as the Islamic State could exploit the instability to launch attacks and concerned the turmoil could lead to more migrants trying to cross the Mediterranean.

Conte hosted Haftar on Wednesday and called for a halt to his offensive.

The prime minister's office said Conte had spoken with France's Emmanuel Macron after the meeting with Sarraj.

Both leaders "reiterated the importance of coordination at a European level in support of the peace process and stabilisation of Libya", it said.

Italy sees itself as a key player in Libya because of its historic links as the colonial power and opposes the increased roles of Turkey and Russia.