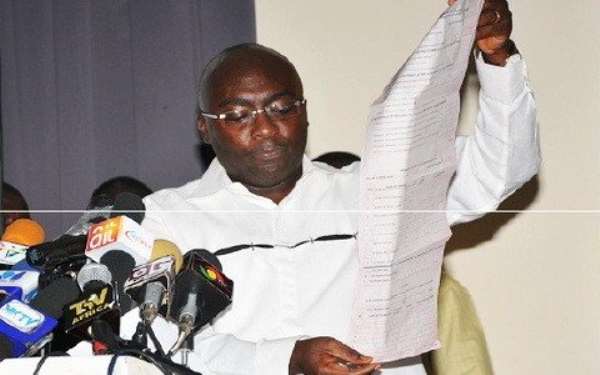 Speaking at the ‘Tikusayi’ demonstration, aimed at protesting against the creation of the new voters’ register, he said that the register that the New Patriotic Party called bloated prior to the 2016 polls, is the same one they allowed to be used to vote then opposition leader, Nana Akufo-Addo into power.

“Where are the 76,000 Togolese? He should produce them. Electoral Commission itself said the register is bloated, which register gave birth to President Nana Addo Danquah [Akufo-Addo],” Haruna Iddrisu quizzed Saturday in Tamale, the Northern Region capital.

According to him, there is nothing wrong with the register that voted President Akufo-Addo into power in 2016.

Dr Mahamudu Bawumia revealed in 2015 that a team commissioned by then opposition party, New Patriotic Party, to go into Ghana’s voter register had identified 76,286 persons the country’s voters’ register.

The now Vice President, speaking at a widely publicised press conference in August 2015, said the party’s team identified this suspected anomaly after comparing Ghana’s register with that of Togo.

These persons, he said, were mostly found in the Volta region with Ketu South cited as one of the constituencies where the anomalies abound.

However, Haruna Iddrisu believes a revised voters’ register should be compiled only when the Electoral Commission is making technological improvements including the addition of facial recognition.

The technological improvements, the Tamale South MP stated, can be used as add-ons to help improve the register.

“The NDC remains committed to the conduct of peaceful Presidential and Parliamentary elections but with the same register that gave birth to Nana Addo Dankwa Akufo-Addo, as President of the Republic of Ghana, the 275 Members of Parliament currently, that created the six new regions,” he added.

Hundreds of people marched through some major streets in Tamale to express their displeasure about the decision by the EC to compile a new voters’ register.

The demonstration dubbed ‘Tikusayi demonstration’ which started from the Jubilee Park was also attended by some political parties including NDC, APC and the PNC.

Haruna Iddrisu also questioned why the Electoral Commission used the voters’ register it claims is not credible for the creation of the new regions and the recently held district assembly elections.