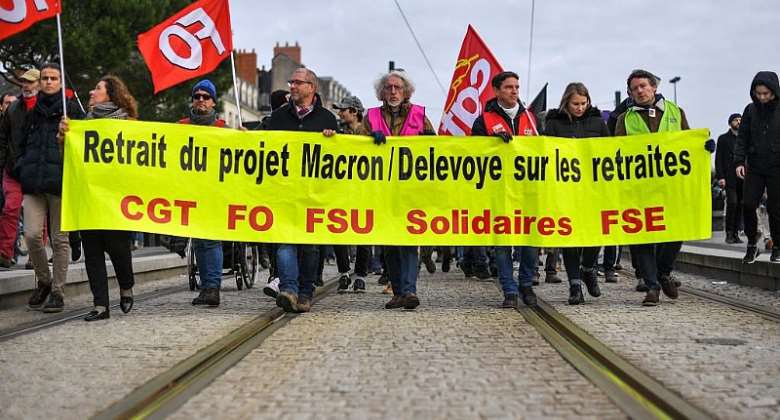 Trade unionists took to the streets of France Saturday for more protests against a controversial pension reform, just hours before the country's premier was due to unveil new proposals to end the standoff. Yellow Vests also joined the action.

Marches were held across several French cities Saturday on the 38th consecutive day of nationwide multi-sector strikes, with protesters continuing to denounce government plans to overhaul the pension system.

In the French capital, a procession got underway shortly after 14H00 local time at place de la Nation in eastern Paris and headed towards place de la République.

Demonstrators were joined by Yellow Vests, who came out to express their own grievances with the government's policies on Act 61 of their movement.

Demonstrators waved banners reading "All of us losers under a pension points system! Retire at 60, all of us winners!"

A general strike on Thursday mobilised hundreds of thousands--1.7 million according to organisers but just 450,000 according to the government--across the country with rallies held in most major cities.

All eyes on retirement age
Saturday's demonstrations came as Prime Minister Edouard Philippe was due to present new proposals to try and end the impasse that has seen France's longest rail strike in decades.

Observers are watching closely to see what Philippe will say about the retirement age, an issue that has soured negotiations even with moderate unions like the CFDT.

Hard-left unions reject anything that doesn't do away with the plan to raise the full pension eligibility age from 62 to 64.

After meeting with unions on Friday, the Prime Minister said that "good progress" had been made and that he was "searching for a compromise", before presenting "concrete proposals" on Saturday.

Slim hopes for compromise
However, a compromise deal for now appears unlikely.

"After five weeks of strike action, we still haven't changed our minds," Philippe Martinez, head of the hard-left CGT union told AFP, denouncing a pension plan that "no one understands."

The CGT, the largest among public sector workers, said it had extended until 16 January a blockade of refineries and fuel depots, which has already caused fuel shortages.

Despite his efforts to compromise, Philippe has insisted the government will not back down on the pension overhaul. The plan is due to be presented to the cabinet by 24 January and the National Assembly by 17 February.

On top of Saturday's planned rallies, more protests have been called for three days starting next Tuesday.