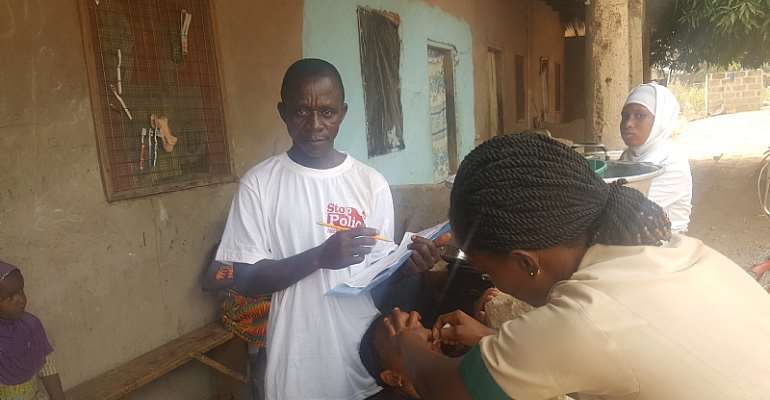 The Pru East District Health Directorate has joined its mother body, the Ghana Health Service, to fight against poliomyelitis through polio vaccination exercise. The round one of this exercise which is taking place in the Oti, Ahafo, Bono and Bono East Regions, began on the 8th of January and is expected to end on Saturday, 11th January 2020.

According to Madam Emelia Dela Kpodo, (Mrs.), the District Director of Ghana Health Service for the Pru East District, this polio vaccination exercise is necessitated by the confirmation of polio cases in the Northern, Upper East, Greater Accra, Oti, Ahafo, Bono and Bono East Regions in the last quarter of 2019. It is in response to this phenomenon that the Ministry of Health and the Ghana Health Service, with their implementing agencies, United Nations Children Emergency Fund (UNICEF), World Health Organization (WHO), Center for Disease Control (CDC) and the Church of Christ of Latter Day Saints, organized this polio vaccination exercise.

To ensure the effective implementation of the exercise, Ghana Health Service gave their workers intensive training before it commenced. In the case of the Pru East District, Madam Emelia Dela Kpodo, the District Director of the Ghana Health Service, attached volunteers from the communities to her medical team. The job of the volunteers, who are largely indigenes, is to convince the people to present their children for the vaccination. To confirm what Madam Emelia Dela Kpodo told me about the work of the volunteers, which sounded very appealing to me, I chose to find out by connecting with one the teams. On getting to them, I stood aside to observe them when we got to a house. At that moment, the volunteer introduced the team and after talking to the people in the house, a mother released her four year old daughter to be given a dose.

I also asked Madam Emelia Dela Kpodo what they are doing to ensure that greater percentage of the children is covered and her response was welcoming. She said they are not only targeting houses but also schools and market places. On demanding to know their target in terms of the number of children her leadership wants to reach, she said with the strategy they have adopted, they hope to reach every child. When pushed further, she said their maximum target is 100% but if for any reason they fail in that regards, they should be able to cover 90% of the children. She however, added that since the round two part of the exercise will happen again from 5th to 8th February 2020, she is very optimistic that her district will achieve its 100% target.

For what I observed on the grounds after the interview, Madam Emelia Dela Kpodo and her team are most likely to cover every child in the Pru East District.