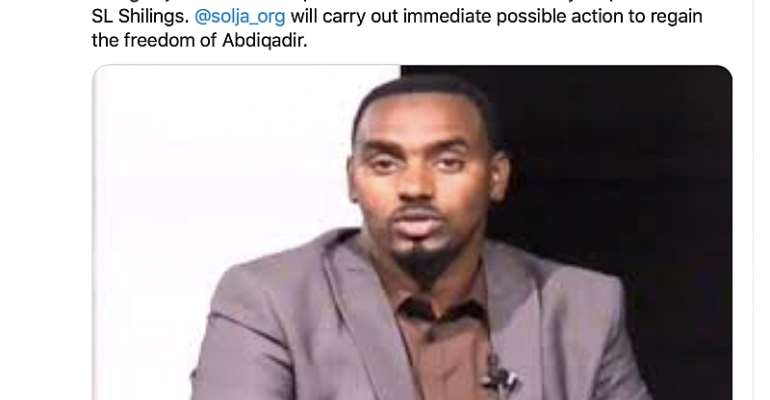 Federation of Somali Journalists has today strongly condemned conviction of the editor of the privately-owned independent Horn Cable TV Mr Abdikadir Saleban Asayr (known as Oday) , saying it is clear intimidation to journalists.

The editor was accused of spreading what the judge called a false news report he did on 2 November about an air safety related incident involving 1 November flight by Flydubai, a UAE-owned airline which reportedly complained against the services at Hargeisa’s Egal International Airport and subsequently forced the flight to be diverted to Djibouti and an interview with Suldan Abubakar Elmi Wabar who leads an armed separatist militia in Awdal region released from the TV.

According to the presiding judge, Abdisalaan, found Oldon guilty of breaching articles 328 and 312 of penal code while clearing him of the government’s allegations under article 220 of the penal code

“FESOJ strongly condemns the unlawful prosecution of editor Abdulkadir, and is a decision to undermine media work.We support the efforts of the lawyers defending of the journalist and the Somaliland Journalist Association who have been advocating the release of the journalist since he was detained” Mohamed Ibrahim Moalimuu Secretray General of FESOJ said

“We share our concerns over Somaliland’s freedom of expression with SOLJA and we see that the harsh treatment of the independent media government will weaken the progress and work of the press” Moalimuu added.

While in prison, this reporter has been experiencing health problems, according to some of the relatives of the journalist.

On 27 October 2019: Federation of Somali Journalists (FESOJ) hosted to Mogadishu three journalists working for the privately-owned Hadhwanaag online media who had fled their station in Hargeysa after repeated harassments and threats of imprisonment, as a result of their work, which has angered the current political leaders in Somaliland.

The trio Abdirizak Good Nur, Director of Hadhwanaag Media, the editor Abdikani Abdullahi Ahmed and Abdirahman Shiekh Hassan are currently in Uganda where they sought asylum after receiving phone threats while in Mogadishu.