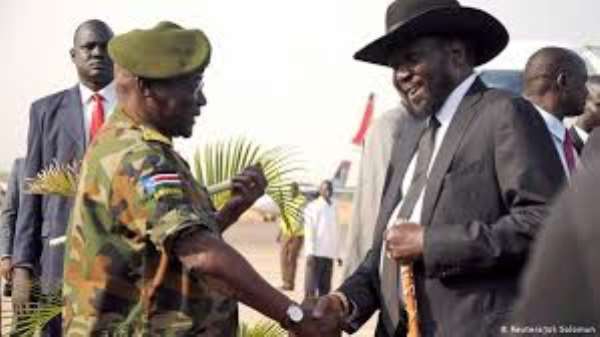 Let’s take the case of William Ruto, the immediate sitting Deputy of Kenya. He called himself “hustler” in that he started off as a small-time chicken entrepreneur. Now, he is locking horns with Raila Odinga, the son of the legendary Kenyan opposition figure, Oginga Odinga. Along the way, he continued to get wealthy by not walking the right path. Raila Odinga, who is already in his 70s is having a hard time controlling the mighty influence of William Ruto. President Kiir, too, got through where he is today by waiting his time out by the side of Dr. John Garang.

The major problem, the way I see it, with us sub-Saharan Africans, is that there seems to be a dark evil force competing with our good intentions. Late Ken Saro Wiwa once penned a short story titled, ” Africa Kills Her Suns.” David Ndii, the Kenyan renown economist think allowing William Ruto to become the president of Kenya is analogous to giving rein to one person to steal all the money of Kenya. David Ndii believes William Ruto is perhaps the worst fraudster that could ever happen to the Republic of Kenya. In Africa, all the best and brightest leaders seem to have a hard time staying in power, they either stay in power for a short period of time as it was the case with Thomas Sankara and Patrice Lumumba, or their precious lives get wasted fighting for the liberties of their people; Dr. John Garang died immediately after the signage of the CPA; Nelson Mandela spent some 27 years behind bars on a highly militarized Island of Robben.

South Sudanese are now suffering at the hands of someone they thought was a true patriot and nationalist during the liberation struggle. Raila Odinga, who is a true opposition icon of Kenya politics has now been turned into a mere beggar by Uhuru Kenyatta who stole his last two Kenyan election victories through intimidation and extrajudicial killings of election monitors.

South Sudanese are getting their bodies open by the organ traffickers in Egypt while Salva Kiir watches by without sending diplomatic ambassadors to shore things up one bit. We can talk all we want, but the truth of the matter is that we are basically slaves to Salva Kiir regime; he is just there to waste our precious natural resources and refuse to make South Sudan a politically stable nation.

As South Sudanese, it won’t bode well with us if we have to take matters into our own hands all the time since our government in Juba is only a figurehead. Deng Dominic Bak recently became the police in Egypt to stop the racial persecution in that wayward country. It is not that there aren’t patriotic South Sudanese citizens in the fold of Deng Dominic Bak; there are thousands of them out there. We have had enough of suffering at the hands of foreign nations for over half a century and there is an end to everything. Good things happen in a peaceful environment, not in destructive war zones.

Nations in East Asia have now reached the level of Western countries and they reached that magnificent height when they weren’t even first-rate democratic states. We may struggle under Salva Kiir for a few decades to come, however, an opportunity may one day its doors to all of us. The opposition parties united under Mwai Kibaki in 2002 and they eventually succeeded in dislodging Daniel Arap Moi on his comfy perch.

Thousands of dictators wannabe right this minute are incubating their evil plots to one day succeed Salva Kiir. William Ruto nursed his presidential ambition during the dictatorial reign of Arap Moi and look now what kind of monster do Kenyans have in their midst. A few years ago, Peter Biar Ajak created South Sudan Young Leaders Forum (SSYLF) to bring up the next crop of leaders to mainstream politics. Once we find a solid footing after Salva Kiir relinquishes power, South Sudanese must allow a similar group of technocrats to govern our nation. In case any of these leaders become too corrupt, then he/she should get removed and another member from the technocratic board of governance replaces him/her. Allowing our executives to run for one or two terms only allow the likes of Yoweri Museveni, Uhuru Kenya, or William Ruto to become leaders, whereas if we had to allow someone who has the best interests of his/her people at heart to run for a certain period of time, then we would no longer be slaves to the authoritarian or dictatorial rule. William Ruto stole his way to wealth and what he enjoys doing now is to give donations to churches and seminaries whereas unemployment is sky-high in Kenya. Where does he expect these youths to get jobs if those in power are doing nothing in particular to address this societal ill?

East Asians have proven us beyond any reasonable doubt we don’t have to develop democratic institutions first before we can realize the sweet fruits of economic prosperity. To rich the promised land, we have to find a way to stop the emergence of monstrous leaders(of which Salva Kiir is a proud member) from making us slaves to their rule every chance encounter.