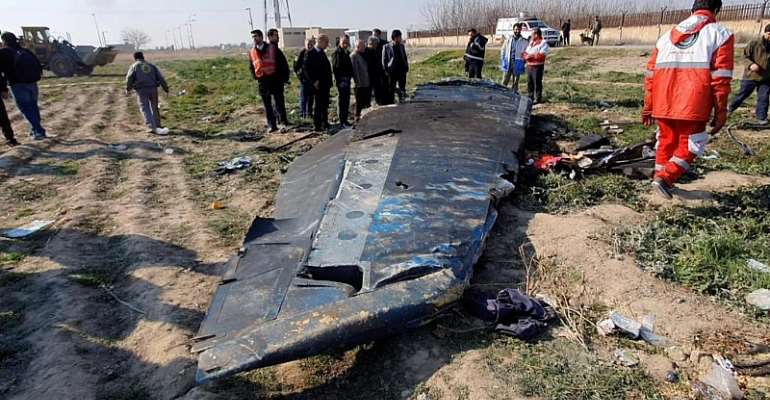 The plane, which crashed on Wednesday killing all 176 people on board, was mistaken for a "hostile plane" and was hit while enemy threats were at the highest level, according to a press statement published by the official IRNA news agency.

Iranian President Hassan Rouhani Saturday said his country "deeply regrets" the shooting down of a Ukrainian airliner, which he described as "a great tragedy and unforgivable mistake".

"Armed Forces' internal investigation has concluded that regrettably missiles fired due to human error caused the horrific crash of the Ukrainian plane & death of 176 innocent people," he added on Twitter.

'Profound regrets'
Iran's foreign minister, for his part, Saturday offered his country's "profound regrets, apologies and condolences" after the armed forces admitted shooting down a Ukrainian airliner due to "human error".

"A sad day," Mohammad Javad Zarif wrote on Twitter. "Human error at time of crisis caused by US adventurism led to disaster," he said.

"Our profound regrets, apologies and condolences to our people, to the families of all victims, and to other affected nations."

Those responsible for shooting down the Ukrainian jet in Tehran this week would "immediately" be brought before military justice, the general staff of the Iranian armed forces added.

"We assure you that by pursuing fundamental reforms in operational processes at the armed forces' level we will make it impossible to repeat such errors," the general staff added in a press release.

Ukraine's President Volodymyr Zelensky demanded that Iran punish those responsible for the downing of a Ukrainian airliner and pay compensation.

"We expect Iran... to bring the guilty to the courts," the Ukrainian leader wrote on Facebook, calling also for the "payment of compensation" after Tehran admitted accidentally downing the plane and killing all 176 people on board.

He also demanded "transparency, and justice for the families and loved ones of the victims," of whom many were Canadian dual nationals.

"This is a national tragedy, and all Canadians are mourning together," Trudeau's office said in a statement.

Earlier, Iran's official IRNA news agency published a statement from the military saying the Boeing 737 was mistaken for a "hostile plane" at a time when enemy threats were at the highest level.

has invited the United States, Ukraine, Canada and others to join the crash investigation. The majority of passengers on UIA Flight PS752 were Iranian-Canadian dual nationals but also included Ukrainians, Afghans, Britons and Swedes.