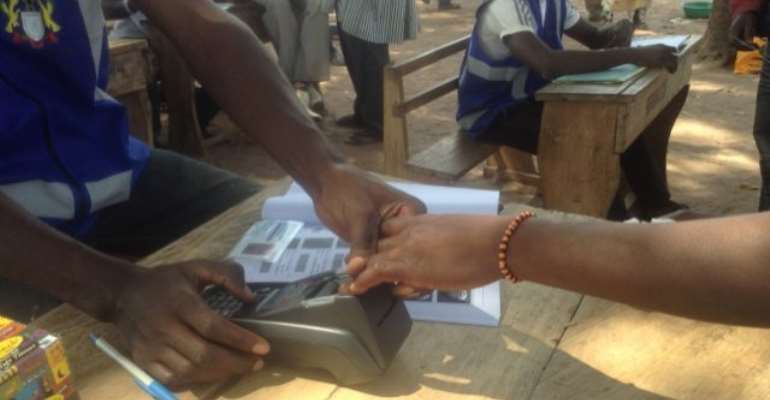 Technology consultant, Maximus Ametorgoh is very much convinced that, plans by the Electoral Commission (EC) to compile a new voters’ register with elements of facial recognition is not the way to resolve the verification hitches encountered during voting.

According to him, the introduction of facial recognition technology poses similar challenges to those being experienced on the current biometric system.

Despite the stiff opposition by some quarters, an amount of GH¢390 million has been approved for the compilation of a new voters’ register which the EC believes will be more credible and efficient than the existing ‘outmoded biometric machines.’

The Director of Elections at the EC, Dr. Serebour Quaicoe justified the plans saying there was a need to tackle verification challenges that occur on Election Day.

But advancing his arguments on Eyewitness News, Mr. Ametorgoh argued that the idea cannot wholly be embraced.

“The [facial recognition of the new register] is not foolproofed. Over time, there will be issues with it. People with similar faces can open the same device or even if you create a 3D of the person’s face, there are many other ways to open the device if people look alike. Such technologies are usually organic so when a person’s features are taken at a point in time, it often picks up new features such as marks, beards, etc over time as the device is used. So I don’t know how they are going to build it into the voters’ register so that when people register in March or April and they are going to vote in December and they have beards or their facial features change a little bit, I don’t know how they are will be able to detect that. The picture may be taken in a particular angle so if your face is slanted during the verification process, it will not be recognized. Depending on the lighting, distance and all that, if something changes, we will come back to the same issue where some fingerprints could not be recognized.”

He also described the move by the EC as a costly venture and advised the electoral body to consider a gradual fusion of the facial recognition to the existing database rather than the entirely new register it wants to compile.

“Another discussion may be that, [there may the need for a new voters’ register again] because when you collect data for people to become legitimate voters, that data is supposed to belong to the EC. So irrespective of the person who provides the proprietary software to collate and compile that, the data still belongs to the EC, so why don’t they use that same data as the primary set for people who are 18 years and above. So that because they are already registered, they can just walk to the [polling centers], provide their voters’ ID and have their facials taken on top of the existing data. But if we are going to start all over again, it is going to be a waste of time and money.”

The Centre for Democratic Development (CDD-Ghana) has described as unnecessary the Electoral Commission's (EC) decision to compile new voters register ahead of this year's election.

According to CDD-Ghana, the argument for a new voters' register by the EC is baseless and does not need to be given the needed attention by the state.

“…I am not really convinced [with the reasons given so far, ]. So far as the recent election is concerned, it [current register] has not deteriorated so much. It has been quite consistent. This is not a big issue. It is not something that we cannot manage if we really want to have a clean register. The other point is that the EC also spoke about the fact that the voters' register is bloated. I will not say the voters’ register is not bloated.”

But thirteen political parties say a new voters' register ahead of the 2020 general elections is necessary.

The parties believe the EC has made a solid case for a new register in terms of cost, time and credibility.

However, the leadership of the opposition National Democratic Congress (NDC) and other political parties are in the Tamale metropolis ahead of a demonstration against the EC decision to compile a new voter's register ahead of the 2020 general elections.