Fifty years on, Nigeria struggles with memory of Biafra war 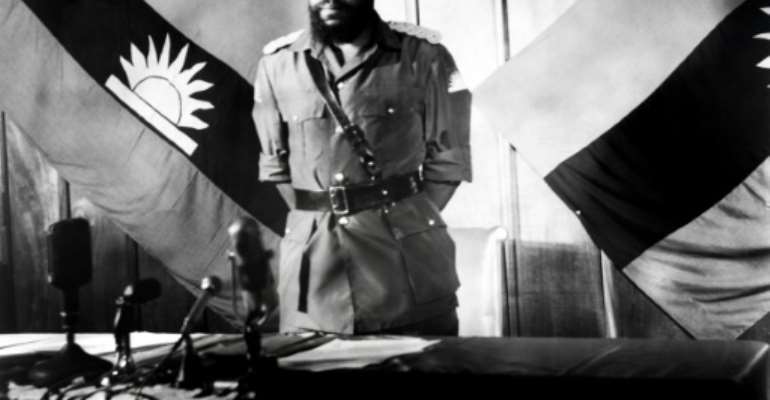 Colonel Chukwuemeka Odumegwu Emeka Ojukwu, the leader of the breakaway Republic of Biafra, stands in front of a Biafra flag. By - (AFP/File)

Dikoye Oyeyinka, 33, has been billed as one of the most promising Nigerian writers of his generation.

He went to some of the finest schools in his West African homeland but says that like the majority of his classmates he "didn't know about Biafra until I was 14".

When he did begin to find out about the brutal civil war that nearly tore Nigeria apart, it was not in the classroom.

Instead it was a schoolmate in his dormitory who showed him a separatist leaflet demanding Nigeria's southeast break away from the rest of the country.

Before then Oyeyinka had known nothing about how leaders from the Igbo ethnic group declared the independent state of Biafra in 1967.

The Onitsha bridge, one of the most important communication pathways of West Africa, is destroyed by the Biafran forces. By Colin HAYNES (AFP/File)

He knew nothing of the conflict that resulted and the 30 months of fighting and famine estimated to have cost over a million lives before the secessionists surrendered 50 years ago in January 1970.

"We've had a very brutal history, the older generation went through a lot of trauma," Oyeyinka told AFP.

"We just sweep it under the carpet, pretending nothing happened. But without knowing our history we will repeat the same mistakes. Our history is a succession of deja-vu."

It was to try to break this cycle of ignorance that the Oyeyinka wrote the novel Stillborn - a historic epic about Nigeria from the days of British colonial rule in 1950 to 2010.

In it the civil war is the pivotal event.

'Our history, our conflict'

Unlike other famed Nigerian writers such as Chimamanda Ngozi Adichie, with her novel Half Of A Yellow Sun, or Chinua Achebe's memoir There Was A Country, Oyeyinka is one of the few non-Igbo writers to have dwelt on the conflict.

"An Igbo friend got angry at me and said 'You can't write about us, it's our conflict'," he recounted.

But Oyeyinka insists that all Nigerians need to be made aware of what happened.

"We need to address these traumas ourselves, as a country, otherwise we are a tinder box ready to explode."

While in the rest of Africa's most populous nation many know little about the history of Biafra, in the former capital of the self-proclaimed state at Enugu the memory of those years lives on.

Biafran flags -- an iconic red, black and green with a rising golden sun -- make appearances on the front of buildings and hardline separatists still demand independence.

The security forces -- deployed heavily in the region -- are quick to stamp out any clamour for a new Biafra.

At the end of the war in 1970, Nigeria's war leader Yukubu Gowon famously declared there would be "no victor, no vanquished" as he sought to reunite his shattered country.

The leader of the breakaway Republic of Biafra, Chukwuemeka Odumegwu Ojukwu, went into exile for 13 years before being pardoned. He returned to Nigerian politics but was detained for 10 months in prison.

One key event was when current President Muhammadu Buhari -- then a military chief -- seized power in 1983, and stopped the only Igbo aspirant to get close to leading Nigeria since the war from becoming head of state.

"In the early 1980's, people had forgotten about the war, but this succession of poor leadership brought bitterness among the new generations," Utomi said.

Nowadays any incident -- from the closure of the only airport in the southeast last year to the sacking of Igbo shops by customs officials in economic hub Lagos -- can cause grievances to flare.

"It's important to deal with history, to write it down. In Nigeria, we try to cover it up," Utomi said.

Nigerian federal army soldiers patrol near the destroyed prison of Calabar, the oldest port on the West African coast. By Colin HAYNES (AFP/File)

"We are more divided today than we've ever been before the civil war. We learnt nothing from it."

In order to try to heal the rifts Utomi helped organise a "Never Again" conference aiming to bring together key cultural and political figures to discuss the lessons of the Biafra war half a century after it ended.

He is also a patron of the "Centre for Memories" in Enugu, a combination of a museum and library where visitors can come and "dig into history".

History itself has been absent from Nigerian schools.

The current government reintroduced it only from last term as an obligatory subject for pupils aged 10 to 13, after more than a decade off the curriculum.

"Teaching history is essential to build our identity as a country, and defend our patriotic values," said Sonny Echono, permanent secretary at the education ministry.

But schools still remain woefully short of qualified history teachers and there is no unified narrative about the civil war which does not figure in the lessons.

"We need to teach the war in our schools," said Egodi Uchendu, a history professor at University of Nsukka, in the former Biafra territory.

"Eastern Nigeria is completely different from how it was experienced in other parts of the country. We need to bring in the different angles to it."

Chika Oduah, a Nigerian-American journalist, has crossed the country to collect hundreds of testimonies of the victims and combatants of the Biafra conflict which she publishes on her website Biafran War Memories.

She says that for many of those she interviewed it was the first time they had retold the horrors of the period.

"A 70-something former soldier... broke down crying, when he told me how he lost his brother during the war," she said.

She herself only learnt at the age of 17 that her mother as a child spent two years in a camp for displaced people.

"Our parents wanted to move on, not look at the past," Oduah insisted.

"But we need to talk about it, otherwise we won't heal".